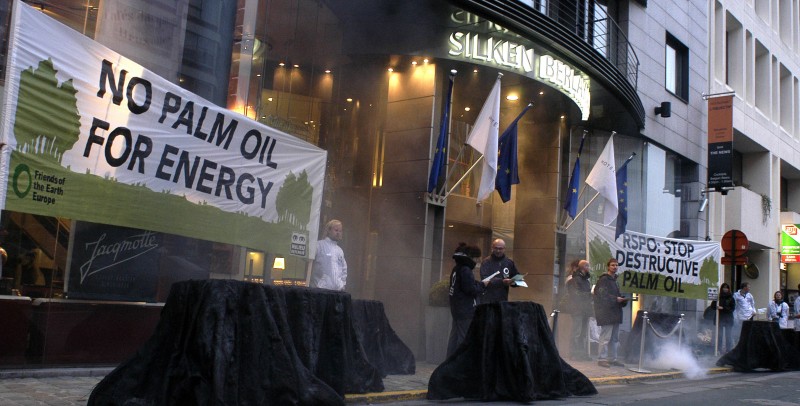 Brussels/Strasbourg, 7 July 2008 - International environment and development organisations are today calling on the European Union to withdraw proposals to massively expand the use of biofuels. The call follows the publication of a major report [1] by the UK government into the indirect or knock-on impacts of using crops as transport fuels. The report's release coincides with a vote later today in Strasbourg on biofuel targets by the Environment Committee of the European Parliament, which is currently debating a proposal to force all EU countries to use at least 10 per cent renewable energy sources, mostly biofuels, in transport by 2020.

The indirect or knock-on impacts of biofuels production include fuelling climate change by further increasing greenhouse gas emissions, exacerbating poverty through raising world food prices and contributing to further ecological destruction such as the loss of rainforests and other valuable wildlife areas.

Adrian Bebb, Agrofuels Coordinator for Friends of the Earth Europe said: "This report should be a wake up call to all governments to drop their mad fixation with using farmland to produce fuels for our cars. The world desperately needs real solutions to our energy, food and climate problems that don't threaten nature or people and their right to food."

The Gallagher report, written by a panel of UK Government experts, concludes that:

- None of the evidence that was reviewed could guarantee sustainability of any biofuels targets, nor could it guarantee that a sustainable biofuels industry was possible. The report calls for the 10 per cent biofuels target being discussed by the EU to be lowered substantially and for no mandatory increases to current biofuels targets.
- Indirect impacts of biofuels through land use change have not been adequately addressed in the assessments underpinning the EU 2020 10 per cent target.
- There are not yet methods to account fully for the greenhouse gas emissions from biofuels production because their knock on effects are not included. Any biofuels target therefore risks leading to overall rises in emissions and thus exacerbating climate change.
- Social impact through rising food prices, particularly in the developing world, are likely to be significant, especially in the short term. The report calls for social criteria, including land rights, to be incorporated within biofuels sustainability requirements
- Advanced technologies (such as fuels from woody feedstocks, organic waste or algae) have a significant potential, but these may only produce biofuels with higher greenhouse gas savings if they are not produced on existing agricultural land.

The report also highlights the high level of uncertainty around biofuels and calls for urgent further research.

Pieter Depous from EEB said: "According to Gallagher's evidence there should simply be no mandatory target, although the report fails to make this concrete policy recommendation."

Frauke Thies, Greenpeace EU renewables campaigner, said: "Blind faith in so-called second generation biofuels that are years away and could even cause environmental damage should not justify setting strict EU targets today."

Ariel Brunner, Agriculture Policy Officer for BirdLife International said: "Current biofuels policies pose unacceptable risks including exacerbating the climate crisis and devastating wildlife habitats. It is time for the EU to be brave enough to admit that this policy is heading in the wrong direction. The 10 per cent target must be dropped."

Rob Bailey, Oxfam's Biofuels Policy Adviser said: "Given the scale of the current global food crisis, the EU should not be pursuing policies that take food away from people and put it into cars."

[1] The report is available at http://www.dft.gov.uk/rfa/

[2] The technology needed to produce second generation biofuels on a commercial scale is still under development. Fuel is created by using waste materials or woody feedstocks and breaking down the cellulose in these plants. These are potentially more efficient than first generation biofuels in reducing greenhouse gas emissions and can be sourced from more diverse feedstocks.