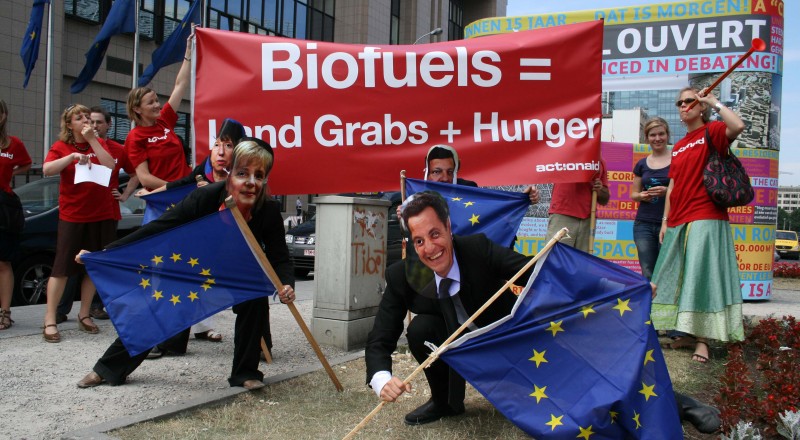 Factory farming and agrofuels blamed for rise in EU's 'footprint'

Brussels, 28 November 2008 - New research published today reveals that the increasing demand for animal feed and agrofuels in the European Union is resulting in the loss of unique forests, serious climate emissions and rural conflict in developing countries [1]. The EU now uses over 16 million hectares of farmland every year to feed its livestock and increasingly to fuel its cars - an area equivalent to the combined arable farmland in Germany and Hungary. Most of the land needed is in South America.

The research reveals that the largest user of land is soy - imported to Europe primarily as animal feed but increasingly used to produce agrofuels (also known as biofuels). Soy production is one of the biggest drivers of deforestation in South America and is associated with widespread environmental degradation, increased pesticide use, violence and human rights abuses of local communities and farmers. European consumers are kept in the dark about the fact that much of this soy is genetically modified (GM) as current labelling laws do not apply to products from animals fed with GM crops.

The findings of the research also highlight that:

- People living in Cyprus, Spain and Denmark eat the most animal products. They permanently use 340, 253, 243 square metres abroad per person respectively just for the production of the soy which is fed to their farm animals.
- Germany, France and the UK together need 4.5 million hectares to grow soy to maintain their current diets.
- The main crop used for biodiesel in Europe is oilseed rape (56 per cent) which needs over two million hectares of agricultural land, followed by soy oil (17 per cent) and palm oil (7 per cent). Germany uses 3800 million litres of biodiesel, almost the equivalent to the rest of the EU put together.

Friends of the Earth and the European Coordination Via Campesina believe that if the EU is serious about addressing climate change, the global loss of biodiversity, human rights, and dealing with the food crisis it must urgently reduce its dependence on imports of soy and halt the use of crops to produce industrial agrofuels.

Adrian Bebb, from the Friends of the Earth Europe's food and biodiversity programme said: "Europe's appetite for meat, milk and eggs, together with the growing demand for agrofuels, is having a massive impact in developing countries. Agriculture in these countries is expanding to meet European markets at the expense of forests, rural communities and the climate."

Gérard Choplin, from the European Coordination Via Campesina said: "Animal factory farming in Europe is unsustainable and cannot survive without cheap imports of soy grown in the South. Agriculture and trade policies in Europe should be changed to allow European farmers to grow more animal feed themselves and to support environmentally friendly family farms."

[1] A comprehensive media briefing and also the research can be downloaded above.

For more information on Soy