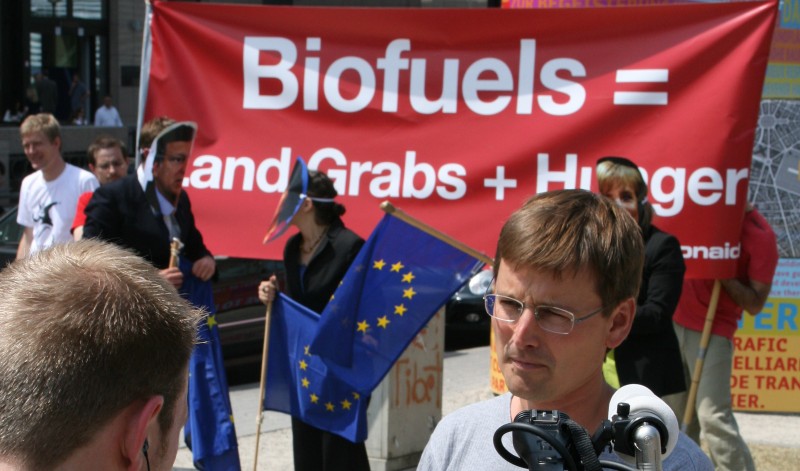 Brussels (Belgium) / Porto Alegre (Brazil) / Montevideo (Uruguay), 10 September 2008 - The rapid development of agrofuels in Latin America looks set to increase big business profits but it is not benefiting local people, according to a new report released today September 10 by Friends of the Earth International. [1] The report is published one day before key MEPs vote on the future demand for agrofuels in Europe.

The new report - 'Fuelling Destruction in Latin America' - looks at current and proposed developments in a number of Southern and Central American countries, all of which are scaling up agrofuel production at alarming rates to meet domestic and, increasingly, export demand to supply diesel and gasoline to Europe and the US.

Paul de Clerck, Corporates Campaigner for Friends of the Earth International, said: "Growing agrofuels on a large scale in Latin America is totally unsustainable and it is not helping ordinary people or the environment. More agrofuels means that agribusiness companies, financial speculators and big landowners will make vast profits at the expense of people and the environment".

The report highlights that:

- Virtually all developments are leading to vast intensively-grown monocultures of crops that are highly dependent on chemical pesticides and fertilisers as well as high amounts of water. These plantations often push other agriculture activities into more sensitive areas such as rainforests and savannahs, and they lead to widespread deforestation and are threatening biodiversity.

- Working conditions are often very poor, akin to modern day slavery, and the use of child labour in some countries is common place. Land speculation is also forcing up land prices and there is evidence that agrofuel production is replacing food supplies for local populations.

- Rural communities are being displaced to make way for the plantations, with conflicts over land rights increasing in all countries. Agrofuel developments are largely taking place in a culture of little transparency and democracy, virtually no land use planning, weak governance and in some cases the use of violence and the involvement of paramilitary groups.

- Close links between business and politics result in governments introducing extremely attractive policies for agribusiness - such as tax breaks, land rights and the relevant infrastructure. These close links also mean conflicts of interest, corruption and governments closing their eyes to illegal activities of landowners and producers.

- Big producers, traders and investors are increasing profits through expanding sales of commodities, agricultural inputs and financial gains from land speculation. International companies are becoming increasingly involved in all Southern and Central American countries examined in this report.

Paul de Clerck continued: "Agrofuel production is expanding mostly because of ill thought-out demand for crops to fuel cars in Europe and North America. Agrofuels are no solution to our climate or energy problems but, as this report shows, agrofuels are increasing pre-existing social, environmental and human rights problems in developing countries."

The Industry Committee of the European Committee will vote on Thursday 11th September on whether to support proposals to make it compulsory that all transport fuel contains at least 10% agrofuel by 2020. In July the Environment Committee voted for significantly reduced targets in the light of mounting evidence of their impacts on food prices, people and biodiversity, and their failure to combat climate change.

Adrian Bebb of Friends of the Earth Europe said: "The evidence continues to build on the negative impacts of growing crops to fuel our cars. Politicians in Brussels should vote against proposed laws that will force motorists to use these fuels and instead support real solutions to the energy and climate crisis such as reducing energy demand and developing more efficient cars."