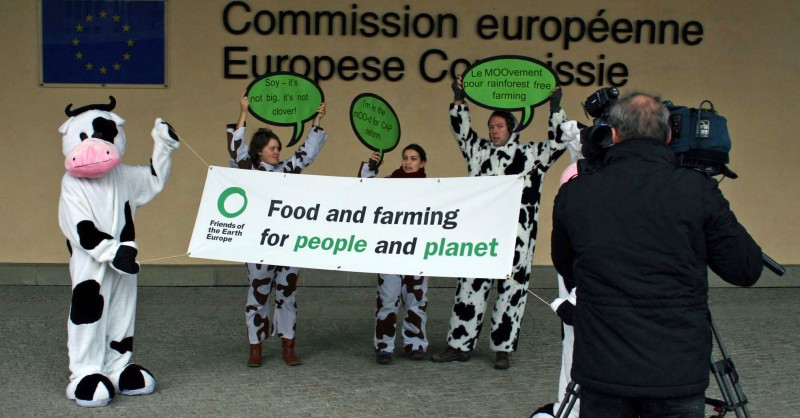 Brussels, January 25, 2011 – Growing demand for meat, animal feeds and agrofuels in Europe is contributing to the continued destruction of the Amazon and Cerrado habitats in Brazil, reveals a new report launched today by Friends of the Earth Europe.

The research comes at a time when Europe is debating the future of farming. [1] Friends of the Earth Europe is calling for the reform of the Common Agricultural Policy to reduce the EU's dependence on imported soy animal feeds and meat.

'From Forest to Fork' [2] takes the most recent data available and finds that the European Union:
- is the fourth biggest global importer of Brazilian meat with more than 250,000 tonnes of beef imported in 2009.
- is one of the main markets for Brazilian soybeans and soymeal buying up about a third of Brazil's harvest.
- was the world's largest importer of Brazilian ethanol produced from sugarcane in 2009, importing 26.5% of the country's exports.

Adrian Bebb, food and agriculture campaigner for Friends of the Earth Europe said: "Europe's overconsumption of meat, feeds and agrofuels is leading to the continued destruction of the Amazon rainforest and Cerrado in Brazil with serious consequences for the climate, biodiversity and the lives of thousands of people. Consumers can play a role by reducing how much meat they eat, but we need governments to urgently reform European farming policy to help farmers reduce their use of imported soy animal feeds, and to cut plans to expand the use of biofuels."

Soy production for animal feed and biodiesel, and cattle ranching for beef, have historically alternated as the main drivers of deforestation in Brazil. The report reveals that these have now been displaced by the expansion of sugarcane. Increased sugarcane production, mainly for ethanol for agrofuels, is now pushing soy and cattle into the forest frontiers.

The research highlights that production of these three commodities is expected to grow – soy production by 5 million hectares by 2020, and cattle ranching and sugar cane production by 25% over the same period. This will place additional pressure on forests, ecosystems and livelihoods in Brazil.

Brazil's current forest laws are under threat from businesses seeking to expand agricultural frontiers to be able to meet the predicted growth in demands. Proposed changes to the laws are due to be voted in the national congress and could lead to 70 million hectares of protected native forest losing its legal protection.

Studies have shown this could potentially release an equivalent of 25 million tons of carbon dioxide into the atmosphere. [5]

Clarissa Trois Abreu from Friends of the Earth Brazil said: "Supported by high overseas demand, agribusiness is aggressively lobbying to turn our forests into plantations and ranches which provide none of the benefits of forests for the climate and wildlife and also pose an enormous threat to peoples' livelihoods. There must be no weakening of Brazil's forest protection laws and international support for better implementation of existing forest laws."

1. European Commission Communication on the future of the Common Agricultural Policy: http://ec.europa.eu/agriculture/cap-post-2013/communication/index_en.htm

2. 'From Forest to Fork – How cattle, soy and sugar are destroying Brazil's forests and damaging the climate' is available in English and Spanish here.