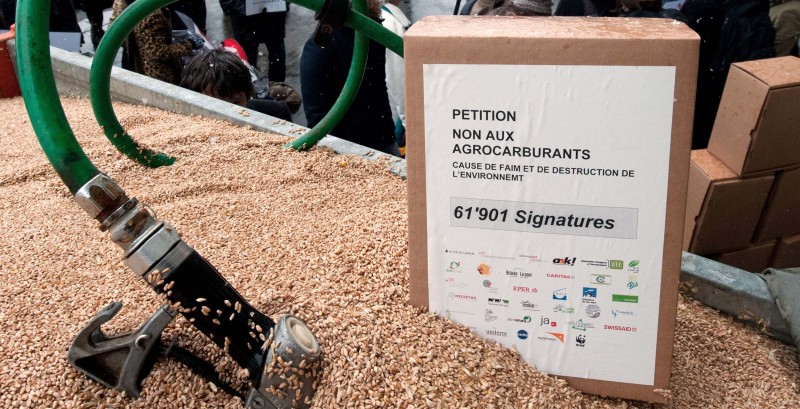 Brussels, July 18, 2011– The European Commission is expected to release the names of seven voluntary certification schemes tomorrow, approved to certify biofuels according to the 'sustainability criteria' set out in the Renewable Energy Directive. This follows a lawsuit filed by environmental law organisation ClientEarth, Friends of the Earth Europe (FOEE), FERN and Corporate Europe Observatory (CEO) against the Commission's refusal to provide access to information regarding the approval of such schemes.

This was the third time the Commission has been sued for lack of transparency on biofuels. For more information see notes to editors.

Janet Pritchard, Climate & Forests Programme Leader, ClientEarth, said: "The way that this has been handled underlines the Commission's practice of shutting out meaningful public participation in the development of its biofuels policy. These schemes are expected to play a role in ensuring compliance with the Renewable Energy Directive's sustainability criteria, yet we still have no specific information about the substance of the applications submitted by these schemes or the standards against which they were assessed in order to be approved.

"Today's announcement still does not provide the transparency required by the Aarhus Convention, which guarantees all EU citizens and environmental organisations the right to participate in environmental decision-making and the right to information necessary for effective participation."

One of the schemes approved is the highly controversial Round Table on Responsible Soy (RTRS). This scheme, an initiative of the soy industry, has been strongly criticised by environmental organisations.

Robbie Blake, Friends of the Earth Europe's campaigner on biofuels, said: "Industry-led schemes to certify crops like soy biofuels as 'sustainable' or 'responsible' are highly controversial and are likely to mislead the public.

"The approval of weak schemes such as the Round Table on Responsible Soy makes a mockery of any attempts to make EU biofuel policy sustainable. The public will be conned and the EU will endorse the 'greenwashing' of large-scale soy monocultures damaging people and planet. This scheme will not prevent deforestation from happening in South America, fails to protect local communities, and even allows the use of genetically modified soy. Endorsing such schemes shows a real need for public scrutiny, not secrecy, around the issue of biofuels."

In March GMWatch, Friends of the Earth and Corporate Observatory Europe wrote a critical assessment of Roundtable on Responsible Soy, an organisation that has been approved to run one of the schemes. You can read their report here.

The lawsuit
In May environmental law organisation ClientEarth, Friends of the Earth Europe (FOEE), FERN and Corporate Europe Observatory (CEO) filed a lawsuit against the Commission's refusal to provide access to information in decisions relating to the sustainability of Europe's biofuels policy. This sought to annul the Commission's decision to refuse public access to information about voluntary certification schemes used to ensure compliance with EU criteria on biofuels sustainability.

The Renewable Energy Directive sets a 10 per cent target for use of renewable energy in the transport sector - expected to be met by increased production of biofuels. Increased pressure on land driven by the surge in demand for biofuels is resulting in increased greenhouse gas emissions as well as threatening vulnerable communities and biodiversity. The sustainability criteria are intended to prevent the most severe environmental impacts by requiring biofuels to protect high carbon stock areas and biodiversity standards set out in the Directive - social impacts are ignored.

Voluntary certification schemes approved by the Commission are expected to play a role in monitoring compliance with the sustainability criteria set out in the Renewable Energy Directive. The EU has now approved some schemes, but the process has lacked transparency.

ClientEarth has also sued the Commission on two previous occasions in relation to its failure to provide access to key studies assessing indirect land use changes, and consequent greenhouse gas emissions, likely to result from EU biofuels policy. Decisions in these cases are still pending.