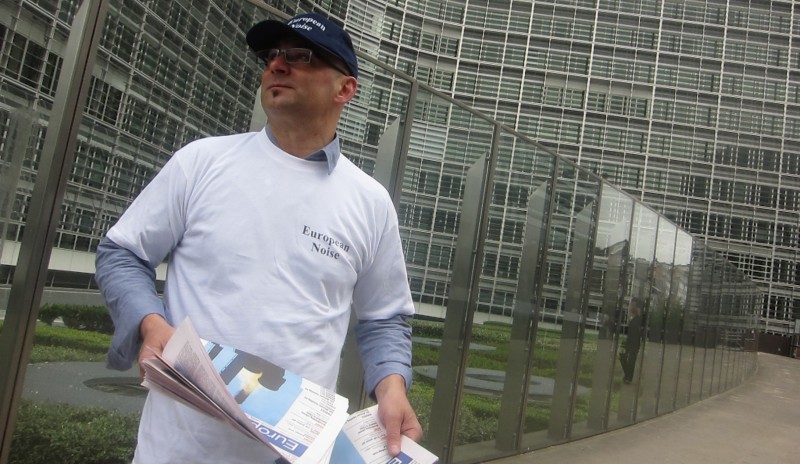 Brussels, May 18, 2011 - Key business sectors are preventing effective action against climate change, warns Friends of the Earth Europe on the opening day of the European Business Summit in Brussels.

The environmental campaign group singled out prominent EU lobby group and summit organiser, BusinessEurope, for blocking ambitious climate action. BusinessEurope presents itself as the voice of the business community when in fact it favours the most polluting industries and denies there are economic benefits for Europe of early action against climate change. [1]

Friends of the Earth is calling on European policy-makers to reject the skewed arguments of BusinessEurope.

Sonja Meister, climate campaigner for Friends of the Earth Europe, said: "BusinessEurope has been resisting tougher emission reduction targets and obstructing the climate action we desperately need. BusinessEurope speaks on behalf of the most polluting sectors of industry and ignores its members which have realised ambitious climate policies can be good for our economy and create millions of jobs. BusinessEurope is pushing Europe into the role of laggard in the fight against climate change and decision-makers should stop accepting their arguments."

The European Business Summit is Brussels' biggest lobby forum and is attended by business leaders and prominent EU decision-makers. This year ten European Commissioners, including Commission President Barroso, will participate. The theme of the event is 'Europe in the world: leading or lagging?'. [2]

Summit organisers claim, 'EU decision-makers should put companies first for Europe to maintain a leading position in the world'. Friends of the Earth Europe believes that it is exactly this approach that is fuelling the climate crisis, and has led to Europe's most severe financial crisis in the last 80 years.

Paul de Clerck, corporates campaigner for Friends of the Earth Europe, said: "The European Business Summit is not a legitimate forum to discuss Europe's future. This meeting gives businesses privileged access to top decision-makers to ensure the profits of a handful of companies can prevail over Europe's interests."

"If Europe is going to lead the world to anywhere other than climate chaos, EU leaders must stop falling for the one-sided arguments of lobby groups such as BusinessEurope. BusinessEurope is dominated by companies such as Shell and ArcelorMittal that have everything to lose from ambitious climate action. The transition to a sustainable low-carbon economy demands the political courage to put an end to business as usual, as represented by this summit."

Lobbying by industry, including BusinessEurope, has ensured that most companies within the EU Emission Trading System (EU-ETS) are entitled to free pollution permits. Many companies even profit from massive 'windfall profits' because they receive pollution permits for free while passing on costs to consumers. The EU-ETS has so far failed to deliver emission cuts from industry. [3]

Europe must cut its domestic emissions by at least 40% by 2020 to deliver its fair share of the global emissions cuts necessary to avert the worst climate change scenarios. This is the minimum scale and speed of reductions science says is likely to be needed to avert a climate catastrophe. Recent independent economic studies have shown that higher emission reduction targets could create six million new jobs [4].

A crucial milestone towards a commitment to 40% cuts by 2020 would be for EU leaders to agree at least 30% domestic emission reductions by 2020 within the next year. Prominent companies and European governments have spoken out in favour of a target of 30%. [5]

Friends of the Earth Europe has produced a spoof newspaper 'European Noise' to highlight the baseless and irresponsible lobby influence of BusinessEurope against climate action. [6]

[1] BusinessEurope was one of the nominees of the Worst EU Lobbying Awards 2010 in the climate category: http://www.worstlobby.eu/2010/nominee/businesseurope

[4] Science says that the EU needs to move to a 40% domestic CO2 reduction target in order to avoid climate chaos: http://www.foeeurope.org/climate/FoEE_SEI_40_study_summary_Dec09.pdf

Researchers from the Potsdam Institute for Climate Impact Research, Oxford University and Sorbonne University found that a higher target of 30% emission cuts by 2020 would increase GDP by 620 billion Euros and create up to six million additional jobs: http://www.european-climate-forum.net/fileadmin/ecf-documents/Press/A_New_Growth_Path_for_Europe__Synthesis_Report.pdf