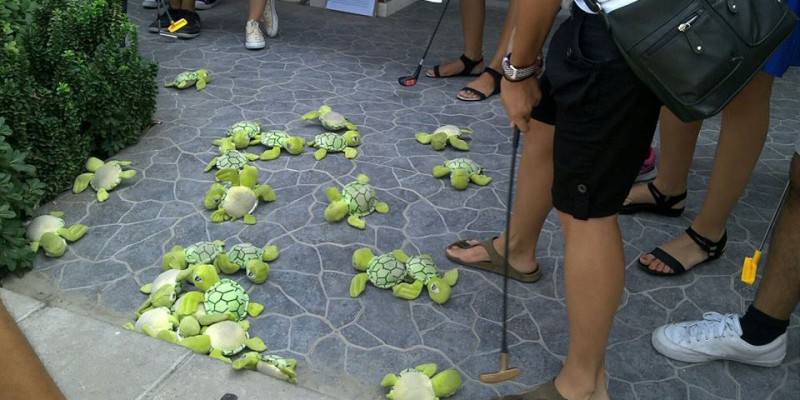 Dressed as golfers and playing with toy turtles instead of golf balls, Friends of the Earth Cyprus demonstrated its objection today to the development of two golf courses in Limni, Cyprus. The golf courses threaten breeding grounds for rare turtles; and will be built at the expense of local people.

Protesting outside Cypriot government ministries, Friends of the Earth Cyprus drew attention to the decision to grant licences for the two golf courses. The licences include the construction of houses on the border of a Natura 2000 nature reserve – an important nesting ground for the protected turtle species Caretta caretta.

Savvas Zotos, president of Friends of the Earth Cyprus, said: “The environmental authorities must restore the set-back area of Limni beach, in order to avoid negatively impacting on the turtles and in-line with the precautionary principle. They must comply with European laws and take all the necessary steps to avoid a fine that will ultimately be paid by taxpayers.” 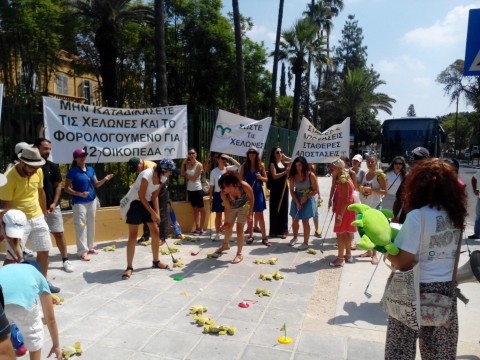 Natura 2000 sites are protected from ecological degradation by European law, and the European Commission has already sent a warning letter to the Republic of Cyprus concerning these golf courses, but is yet to receive a response. There are fears that if development goes ahead, the turtles’ nesting ground will be destroyed and Cyprus will incur fines from the European Commission which would ultimately fall on Cypriot taxpayers.

Friends of the Earth Cyprus called on the Cypriot government to respond to the European Commission about the dangers inherent in these developments. They also asked that any licences for developments expected to damage the turtles’ nesting ground be withdrawn, and that a full dialogue with scientific and environmental groups be entered into to ensure that beach at Limni is protected.