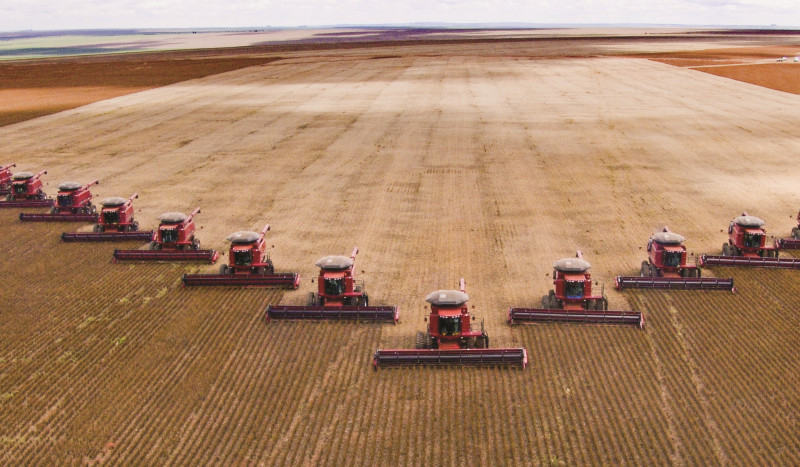 Every year, big factory farms in the EU rear more animals for meat than there are humans alive on Earth.

More than eight billion animals means over eight billion mouths to feed – not an easy job. But what do they eat, and where does it come from?

The answer is worryingly simple – it's a lot of soy, mostly from South America and increasingly also from the US.

EU countries import so much to feed their factory farms, it's the equivalent, weight-wise, of 13 elephants arriving in the bloc every single minute. That's 36.1 million tons every year, with the US, Brazil, Argentina and Paraguay supplying the bulk. Meanwhile, just 2.5 million tons are produced domestically.

And these elephants have destructive footsteps. Feeding European farm animals means huge, soy monocultures in South America, leading to communities being forced off their land and massive deforestation.

Politicians are starting to wake up to the problem. Some decision-makers across Europe want to boost the amount of high-protein plants like soy that are grown locally.

In 2017, 13 EU member states threw their support behind the idea, and in November 2018 the European Commission will reveal its 'Protein Plan for Europe' – with some steps forward towards more soy and other protein crops being grown on European fields.

However, with current global soy production already in the hands of big multinational corporations, there is a real danger that some of the well-documented problems in South America will be simply transported to Europe. This is a particular worry in countries like Romania in Eastern Europe, where small-scale farmers are already being squeezed out to make way for huge industrial farms.

Simply put, there's no good option to keep growing this amount of soy. If we can't make the supply sustainable, maybe it's time to look at the demand.

If we're serious about cutting the social and environmental impact of soy production, there's a simple answer: we have to stop growing so much. And this means dramatically reducing the amount of factory-farmed animals in Europe.

We need to eat less, but better meat. And the animals we farm for food should be fed by small-scale, sustainable farms which practice crop rotation – not giant monocultures. Many farmers in Europe are doing this already by growing and using diverse protein crop varieties produced in an agroecological way.

This November, we need to make sure the European Commission and member states bear this in mind – and don't simply shift the impacts of our soy addiction to Europe.