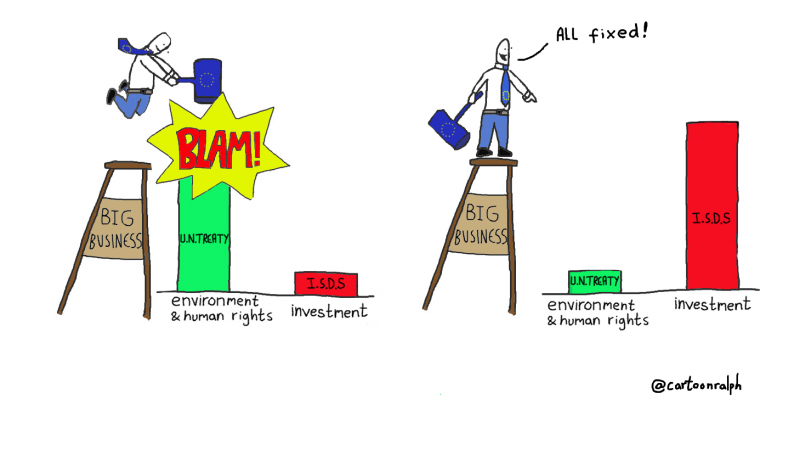 Corporations have their own global private court system which they use to bully governments, while many victims of corporate human rights abuses, people or communities, don’t have access to justice.

Right now, we need to end these unfair corporate courts and put in place a strong global system that punishes multinationals for their crimes.

ISDS – short for ‘Investor-State-Dispute-Settlement’ is an obscure parallel justice system only accessible to the super-rich. Multinational companies have used this system to threaten governments that dare to stand up to them with claims of up to billions of euros. And they don’t even have to win their case to get their way. For many countries, the mere threat of a huge claim can be enough to persuade them to back down and let corporations win.

Corporations and rich inviduals have pocketed 545 million dollars on average from countries for democratic decisions to protect the environment, to combat climate change, etc. Today, the EU has dressed ISDS with a new name, ICS (Investment Court System), and it wants to make it global with the MIC (Multilateral Investment Court), a permanent global court where corporations will sue states.

We need to remind the EU and European governments that people rejected TTIP and CETA because of this unfair parallel justice system. To stop ISDS, we need to oppose new deals, especially the EU-Singapore investment agreement, and get rid of existing ones. Corporations and the super-rich do not need a separate system to protect their rights.

Corporations destroy the planet. But instead of punishment, they get more power. Over the past decades, the extent of corporate power has become overwhelming, and victims of corporate abuse are struggling to get access to justice.

Corporations hide behind complicated and opaque ownership structures to avoid legal responsibility. This means that they regularly get away with perpetrating serious human rights and environmental abuses including: Land grabs, Murder, ecocide and mass pollution, driving climate change, forced labour and violence

Campaigners and social movements from across the world have united to push for a global system that stops multinationals from abusing human rights: the UN Treaty on Business and Human Rights.  But rich countries – including European governments – are fighting tooth and nail to avoid this. The very same governments who think that global corporations need special rights and a separate ISDS court system don’t want to give ordinary people the right to hold multinationals to account.

This is why we need to fight hard to make sure our politicians wake up!

What can I do?

We are a broad alliance of over 150 trade unions, campaigning organisations and grassroots movements.

The movement is big and it is growing bigger every day.

The momentum is with us. We are living through a once in a lifetime opportunity to deal a strong blow to unaccountable corporate power.