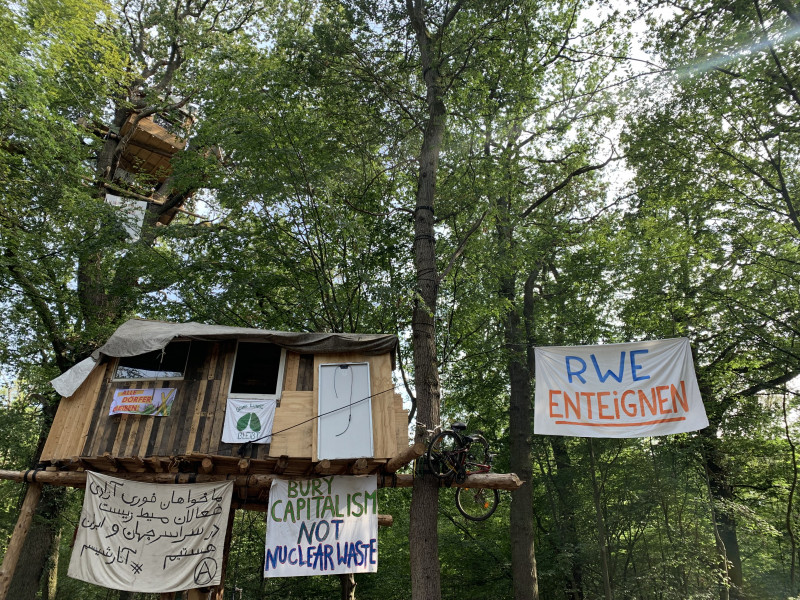 One of the tree houses of Hambi forest // Marielle Veillard

During the Training for Traineers: inclusive climate justice work, four brave young adults ventured out in the Hambach forest and lived to tell their story.

The forest is situated close to the German town of Buir, and has been occupied by protesters since 2012. A lignite coal mine right next to it has been functioning since 1978, forcing many local citizens to leave their villages. Further expansion of the extraction site would mean destroying the last 200 hectares of the forest area which used to stretch over 6000 hectares. The “Hambi” is an endemic forest that has been allowed to grow without human intervention for thousands of years, giving a haven to rich biodiversity. In view of the threat, people from all over the world have decided to give up their modern comforts in order to try and save this forest. The network of solidarity includes about 100.000 people. Some of them support with (food) donations, some visit frequently, some even live there permanently. Many curious summer camp participants went to meet those people, four of them tell us their experiences.

Alex from Spain did not have many expectations about Hambach forest, so what met him was a surprise. The forest was vast and lush with diverse plants, insects and greenery everywhere. Only a minor part was actually occupied by people.

As he discovered, the people in the “barrio” he visited had formed a tightly knit community. Like most visitors, Alex was impressed by the elaborately constructed tree houses. The activists have made the trees their home in order to protect them.

Something Alex will never forget about the forest is how spectacular everyday life appears. He observed a little child, with safety gear of course, climbing a seemingly never-ending tree with the greatest ease. How will growing up in this special forest mark his childhood.

The strong part about the Hambi community spirit was the irrelevance of external factors like nationality, status and achievement. What marked people and raltionships was what they did to protect the forest and uphold the community

Laura from Germany expected an alternative wonderland among the trees. People looking like punks from Berlin would be chilling and taking life with ease. She was uncertain if the protesters living in the forest would even welcome visitors, intruding like a “tourist” in their private homes.

However, the protesters living in the forest were not at all taken aback by our visit. The openness and their generosity were surprising, everybody was happy to give directions. Laura had to admit with laughter that her group got lost in the wild forest anyway. Later a smiling woman invited them into a so-called “tower”, a tree house reachable from the ground by ladders. The summer campers returned the invitation and met the inhabitants of that “barrio” at the camp a day later.

Laura noticed a lot of rules – written in German and English-, wondering if that didn’t contradict the anarchy the community was claiming. The strong part about the Hambi community spirit was the irrelevance of external factors like nationality, status and achievement. What marked people and relationships was what they did to protect the forest and uphold the community. 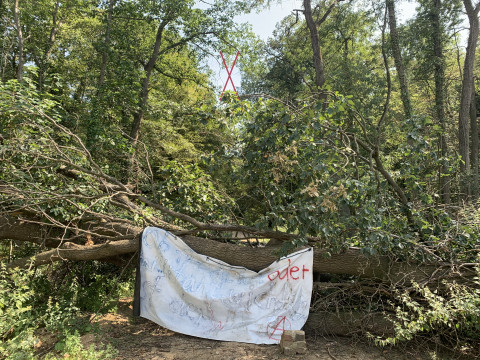 Pip from Australia expected people to be furious, with police violence, evictions and the threat of cutting down the forest they had enough good reasons. However, when she got there the people didn’t seem angry at all, she wondered if that might be because Summer Camp participants were on the same “team“.

What was surprising to Pip were the people with masks all over their faces, sparing only the eyes. She hadn’t expected to see that many of them. Later she learned that the masks were a precautionary measure to avoid being recognised as a protester, as well as a symbol of solidarity with activists that are already wanted by the police.

It was curious how they had created their own world of sorts, living in a parallel society. Since they had their faces covered and outside status didn’t mean anything to them, they had different ways of relating to people and creating relationships.

I was expecting a bunch of hippies inhabiting the forest. I was proven wrong when I encountered a highly organised egalitarian society.

Bitz from Croatia was expecting nothing else but a bunch of hippies inhabiting the forest. He was proven wrong when he encountered a highly organised egalitarian society. Surprisingly, many forest inhabitants were our age - they were dedicated and showed a lot of courage. That way of life must be very hard, living up in the trees, transporting water from far away and facing the constant threat of police and eviction. He could imagine living like this for a few days, but many have been living in the forest for years.

Bitz remembers clearly the story of a man who lived a double life. When he was at home, he was this highly educated professional who lived his life like it was expected of him. His “hobby”, so to say, was living in the forest. Here, he was another person, not judged by his titles, degrees or money.

We were all impressed by the lifestyles of the activists, how they lived and how they built their community and “barrios”.

Something that has surprised the whole group was the engineering skills the people showed. They weren’t professionally trained but they still had managed to build a whole society up in the trees. Nets for relaxing, solar panels, zip lines, bridges and three-story houses were among the things you could find in the forest.

What struck us most was the how warm and inviting manner of people of the forest. They had no objections to sit down and answer all questions we would have, even invited us into their homes and personal space. We got the impression that wouldn’t have minded spending all day with us. Not once did we have the feeling that we were not welcome in “Hambi”.

Perhaps the forest is a wonderland after all.