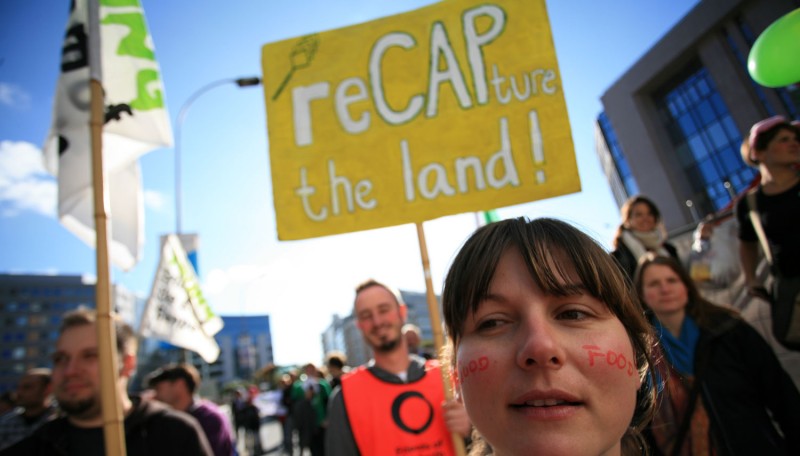 This land is your land

Stanka Becheva, our food and farming campaigner, on why we need to put agroecology – small scale and sustainable farming solutions – at the heart of European agricultural policy.
---
Our agricultural system is broken. This has its roots in European policies that support unsustainable industrial farming, but also in the increasing disconnect between people and the food they eat. This manifests itself through the ongoing disappearance of thousands of small-scale farms in Europe, as well as to the exploitation of farm workers – particularly migrant workers across the continent.

The main challenge for those trying to build an alternative, sustainable food system is obtaining land for new or existing small-scale farms. Perverse subsidies, unstable and biased market conditions and increased corporate control push up the price of land, increase the levels of debt, and make it impossible for smaller independent or family-run farms to keep land. In Eastern and Central Europe, cheaper land prices and an open market have led to European businesses buying large areas of land for industrial agricultural projects – again pushing out smaller-scale projects.

Therefore over 75 farmers' and other civil society organisations from across Europe, including Friends of the Earth Europe and Amis de la Terre France, have signed a petition, initiated by the European Coordination Via Campesina and Terre de Liens to highlight how access to land is denied to small-scale farmers, and the alarming rate at which farmland is disappearing throughout Europe. The European Union is now among the most unequal regions in terms of land distribution.

We are demanding that European institutions adopt a new approach, and ultimately a new legally-binding directive on farmland allowing better governance and access to land to people, prioritising the most vulnerable ones as well as ensuring nature protection and sustainable social and economic development. The United Nations adopted in 2012 new guidelines for the responsible governance of land. It is long overdue that these were implemented in the EU as well. This is an important part of a major overhaul needed of our approach to food and farming if we want to overcome the problems of the current food and farming system.

Giving small-scale and sustainable farming a chance increases sovereignty over our food and allows us to shift more rapidly to agroecology and a re-localised food system. Reducing that gap between people and the food they eat. Action is needed at all levels – locally, nationally, internationally – by consumers, communities, NGOs, government officials and politicians to bring about change. We ask the European Parliament to take the initiative and demand radical changes from the European Commission and EU member states.

Land matters. By securing fair access to land we will have the best chance of rescuing our suffering countryside and rural communities. We can protect our nature and limited resources so that we can safely and sufficiently provide food and water for the generations to come. This land is really our land, and our future.