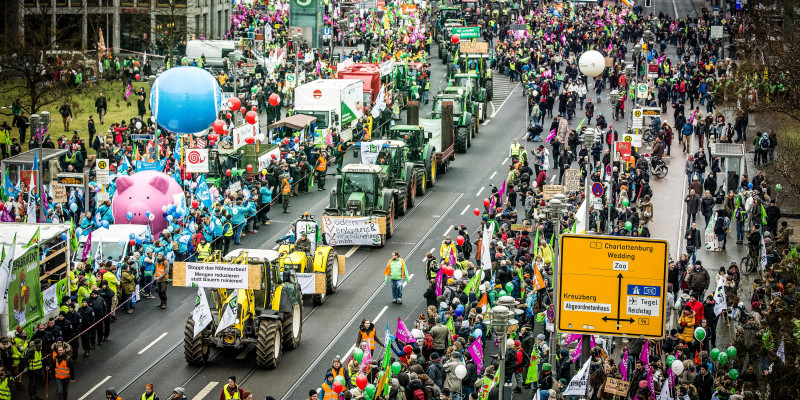 Last Saturday, 130 tractors led 18,000 people demanding an urgent shift away from destructive industrial agriculture across the streets of Berlin.

The colourful march was led under the banner of "agribusiness, hands off our food!" and was part of the annual "Wir haben es satt" (we've had enough) demonstration. With the world's largest agribusiness giants planning to merge the corporate threat to our food system has never been greater.

If the three mergers – Bayer-Monsanto, Dow-DuPont, and Syngenta-ChemChina – were to go through, just three companies would control about two-thirds of the global seed and pesticide markets.

Adrian Bebb, food campaigner at Friends of the Earth Europe, said "These agribusiness giants already wield a huge amount of power over agriculture across the world, and allowing them to further consolidate their power would be terrible news for farmers, the countryside and the food on our plates. We need to stop these mega-mergers in their tracks and re-empower small farmers and local food movements."

Meanwhile, the march also called on the German Government to implement a fair and environmentally-friendly rural and agricultural policy.

Hubert Weiger, Chairman of BUND/Friends of the Earth Germany, commented: "Another agricultural policy is necessary and possible - towards more regionalism, sustainability and the protection of our natural resources. Organic farming shows the direction we must take. The German government must reject the current business as usual and finally make the necessary reforms."

More on the march from BUND/FoE Germany