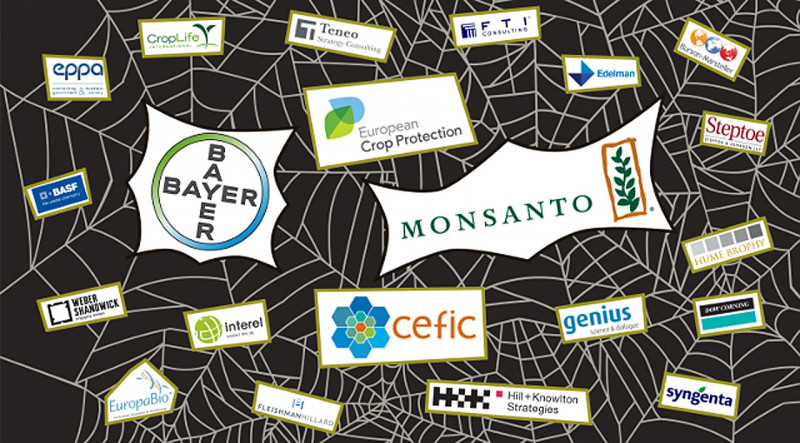 This Saturday, activists around the world will unite, and march against Monsanto. Opposition has been mounting to the Bayer-Monsanto mega-merger, Friends of the Earth Europe even staged a 'marriage made in hell' outside the European Commission headquarters in Brussels. Here Myriam Douo, lobby transparency campaigner for Friends of the Earth Europe explains the complex web of influence the two corporations have spun, and why a Bayer-Monsanto merger threatens people and the planet.

The food system is coming under increasing corporate control, and Europe's industrial model of farming and food consumption is destroying people and the planet.

The potential Bayer-Monsanto deal is one in a series of mergers in the agriculture-chemicals sector, with a Dow Chemical-DuPont deal and a Syngenta-ChemChina merger already approved by the European Commission. The mergers will lead to an unacceptable monopoly, with the three companies controlling up to 70% of the world's agro-chemicals and up to 60% of commercial seeds.

Agribusiness corporations like Bayer and Monsanto continue to promote an industrial model of agriculture that is destroying soils, water supplies, rural communities and biodiversity, promoting climate change, and is slowly turning the Earth into a desert. They are not feeding the majority of people worldwide, as they would like to think, rather the opposite – threatening long-term global food security for the sake of profits.

Big cash cows for Bayer and Monsanto respectively are insecticides called 'neonicotinoids', whose active ingredients are a main driver of the large-scale death of bees and other pollinators, and the weed-killer glyphosate, found to "probably cause cancer in humans" by the World Health Organisation (WHO).

In the coming months the EU will decide whether to grant another 10-year market authorisation for glyphosate-based weed killers. Given the WHO findings, you might wonder why there's even a debate. To answer this question we need to delve into the EU's transparency register, and then deeper into the complex web of influence that the two companies have spun – based on the research from Friends of the Earth Europe and Corporate Europe Observatory.

According to the register, Bayer and Monsanto's combined spending on declared lobbying activities in the EU for 2015 alone was €13,521,187. The real amount is likely to be much higher. Monsanto and Bayer have built a vast network of influencers to bend EU laws and safety standards in their favour. Lobby activities on their behalf are coordinated by lobby associations organised at global, regional and national level. In Brussels, Monsanto and Bayer are represented by the seed lobby European Seed Association (ESA), pesticide lobby European Crop Protection Association (ECPA), biotech lobby EuropaBio and chemical lobby CEFIC.

Monsanto funds an industry lobby group called the 'Glyphosate Task Force' set on achieving an extension of the market for the toxic week-killer. Bayer hired the 'product defence company' Exponent to attack the scientific evidence underlying the neonicotinoids ban.

These costs are unlikely to be part of the declared lobby spending, and the same is likely true for the costs of the specialised support they receive from other lobby consultancies and law firms like Fleishman Hillard, Weber Shandwick, FTI Consulting, Hill & Knowlton and Burson-Marsteller. Monsanto and Bayer are also members of industry-funded science platforms like the International Life Sciences Institute (ILSI) or the European Centre For Ecotoxicology and Toxicology of Chemicals (ECETOC), which aim to skew the way products are approved in the industry's favour.

It's a terrifying web of influence, bent on only one aim: increasing profit. And this is exactly why it's so dangerous. It is locking in a resource intensive, chemical-based industrial farming model where control over seeds, chemicals, data and machinery sit in the hands of a decreasing number of very large corporations. This model of farming is wholly unfit for the future. The UN estimates we may have fewer than 60 years of farming left if soil erosion is not halted. These corporations are steering us on a course of unprecedented food insecurity

Food sovereignty and small-scale ecological farming is the only way to preserve soils and sustainably feed the world in a changing climate – with food production fully in the hands of producers and consumers. Environmentalists, farmers, farmworkers, beekeepers, and religious and international development groups are all opposed to this Trump-backed Bayer-Monsanto deal and are calling on Competition Commissioner Vestager to block it. The EU needs to listen.

We need to build a fairer and greener food system out of corporate control – that provides pesticide-free food; guarantees a decent living for small-scale farmers, and ensures food sovereignty for all.