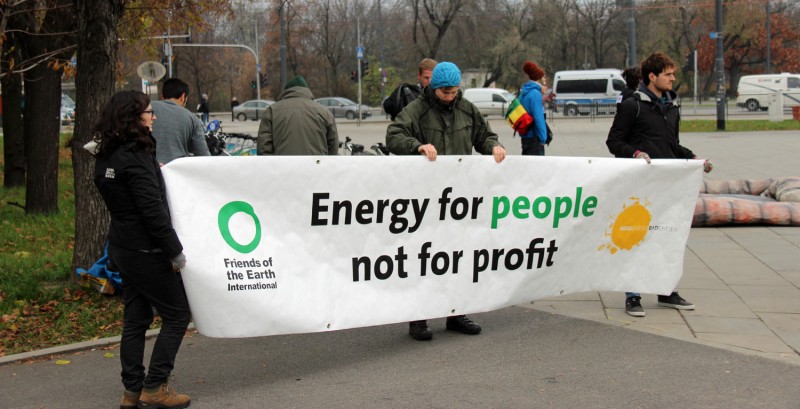 Warsaw must respond to planetary emergency

Friends of the Earth Europe called on politicians to keep dirty energy out of the international climate talks in Warsaw, and for urgent action to respond to a planetary emergency. Dirty energy sources have no role to play in a fair, clean and safe energy future, according to the organisation.

Susann Scherbarth, climate justice and energy campaigner, Friends of the Earth Europe said: "We need a fair and balanced transition from dirty energy to small scale, locally-appropriate renewables. Otherwise there is no hope of addressing the current planetary emergency."

Young Friends of the Earth Europe inflated a huge carbon-dinosaur representing the destructive and fossilised interests of the fossil fuel industry and some developing countries at these talks. 'Civil society' then symbolically deflated the carbon dinosaur.

Rich countries have benefitted from decades of pumping carbon into the atmosphere, but it is those who are least responsible for climate change who face the worst of its impacts.

SIlje Lundberg from Young Friends of the Earth Europe said: "Our politicians in the rich world are failing us. We cannot forget the historical responsibility that rich countries have for solving this climate crisis – but the politicians here are more worried about upcoming elections than they are about the biggest challenge our world faces. It's all talk, no action. Civil society need to keep pressuring them at home. We need to give them hell."

The European Union is still lagging at the talks, according to Friends of the Earth Europe, with insignificant emissions targets, and insufficient financial pledges for those developing countries that will need to adapt to, mitigate and compensate for the losses from climate breakdown. The solutions to climate change must tackle these gross imbalances, and provide urgent, fair and rapid emissions cuts, according to the organisation.

There is broad civil society criticism of the governments of rich developed countries, for failing to support ambitious emissions targets, or providing a robust framework for compensating those communities and countries that will suffer irreversible losses due to climate change. Major emitters such as Australia and Japan have been cited as major stumbling blocks to any progress.

Kicking coal out of the climate talks, November 2013