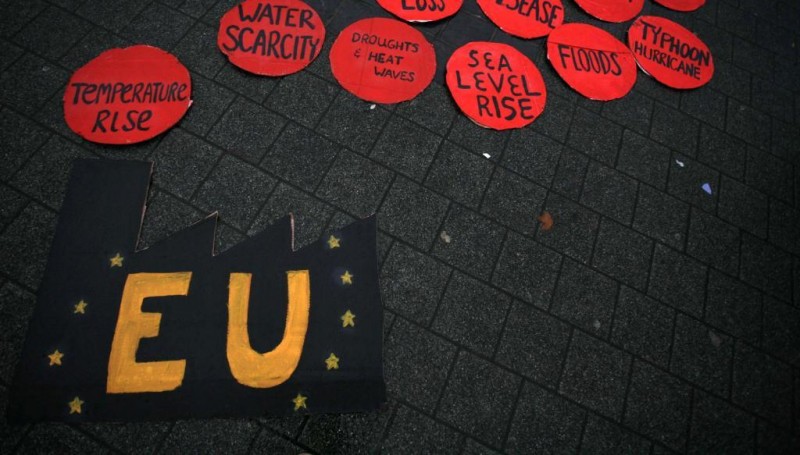 On the last day of the COP 18 UN climate talks, European youth gathered in Brussels have drafted this open letter to Connie Hedegaard, the EU commissioner for climate action. Please read the letter we have sent to her, and forward it far and wide.

We, European youth and civil society, are writing to you in these critical final hours of the UN climate talks in Doha to demand that the EU acts now and changes its position at the UNFCCC.

We have witnessed over the past two weeks the EU's consistent refusal to live up to its responsibilities, and we condemn this lack of progress. The EU claims to be a climate leader but it is acting as a blocker.

Inaction for the next 8 years is not acceptable. A 20% reductions pledge under the Kyoto Protocol is simply a smokescreen; this target has already been met so we know that you are pledging zero. The EU has proved it has the capability to cut its emissions quickly and deeply and we need to take the lead on the world stage in cutting further emissions. Your 0% pledge COP-out will subject us to catastrophic climate change. The EU is supposed to protect us and youth around the world. You are not fulfilling your duty.

We welcome pledges for climate finance from certain member states and the EU under the Bali Action Plan but it falls far short of what is needed for mitigation and adaptation measures in developing countries. It is especially inadequate if we consider the implications of a weak EU mitigation target. The EU in Doha have blocked discussions on finance; failing to set an aggregate target and refusing to discuss the suggestion that climate finance must be scaled up each year. This is unacceptable. We call on the EU to provide scaled up aggregate climate finance and we demand assurance that this will be new, additional, public funding – not a simple redirection of Official Development Aid as we have seen with the EU's fast-start finance pledges.

Stop using Poland as an excuse for EU inaction. You must move beyond internal differences and take collective responsibility for the sake of current and future generations. By representing the economic interests of a select few, you are betraying us and our right to a clean and just future. By refusing to make meaningful progress under the Kyoto Protocol and the Bali Action Plan – as agreed in the Durban Platform – you are betraying the poorest and most vulnerable communities across the world. We stand in solidarity with them and we reject your empty pledges.

There might have been a time when decision-makers could ignore us; that time is now over. We are not one person. We are not one country. We are uniting and mobilising. We are many and the message is spreading fast. There is growing discontent with the way the EU conducts itself on the international stage. The EU is supposed to speak on our behalf, but our voice is being stifled and it is clear that you are not representing us. The deal on the table is simply a suicide pact for the people of the Global South and we will actively resist your decision to condone such an injustice.

We will be watching you in these final hours of negotiations in Doha. We demand that you refuse to sign us up to an unjust deal. We demand that you act to drastically increase your finance and mitigation commitments. This is not negotiable. We will not back down.

With Support from Global Civil Society: