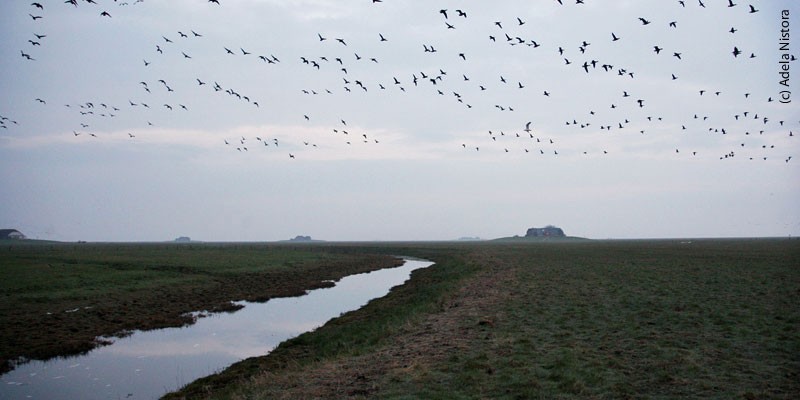 Flight to the wadden sea: A story from the front line of climate change

"There is a place where heaven and earth share the same stage..."

Let me take you on a journey. Open your mind to see and experience the beauty and drama of a unique and vulnerable place. Let your imagination spread its wings. Now fly with me.

We're flapping our wings towards the endless horizons. Breathe in the fresh sea air. We're above the largest European wetland area - its tidal flats form the largest unbroken stretch of mudflats worldwide. Imagine an immense tidal area that stretches over three countries: Denmark, Germany and the Netherlands. This place is the Wadden Sea.

We're gliding over the tiny island of Langeness, off the north-west coast of Germany. It's beautiful and peaceful. Watch the aerobatics of the immense flocks of birds on the horizon, isn't it exciting? There, can you spot those creatures in the sea, sticking their heads above the waves and curiously looking back at you? They're seals. Now gaze below us. A skein of geese cackle in the air, preparing to land. Their daily activity is ruled by the tides – twice a day the seabed meets the horizon. Let's dive in and take a closer look.

The tide ebbs, the mud gleaming freshly enriched with organic matter – no wonder the mudflats are teeming with life! Millions of tiny algae, thousands of small worms, crabs, snails and shellfish abound on and in each square metre. A flock of waders cautiously pick their way on the newly-exposed seabed looking for food. This is a crucial refuelling stopover for millions of migratory birds. Some stop to rest and fatten up on the journey between their Arctic breeding grounds and their wintering sites in West Africa, while others stay for the winter. Migrating birds connect the Arctic to all parts of the world – it's breathtaking!

Let's fly over that salt marsh. Take a close look. Look closer. Microscopically close, and beyond. Can you see that? It's blue carbon – that's carbon captured by living organisms in oceans and stored in sediments in mangroves, seagrasses and salt marshes. Such coastal vegetation sequesters carbon far more effectively - up to 100 times faster! - and more permanently than terrestrial forests. Can you feel now what an amazing place the Wadden Sea is?

It's getting dark and there's a thunderstorm coming. Let's fly faster, faster than light. Flap your wings seventeen million times a second. We're getting warmer. The earth's temperature is changing. The sea level is rising higher and higher with each tide. Large dykes are built to fortify the coastline and protect the areas inhabited by people. The habitats between land and sea, mud flats, salt marshes, beaches and dunes, are eroded by waves higher and higher. The flooding of sandbanks and salt marshes is increasing. We're nearly there. The mudflats don't stay clear of the water at low tide anymore. They disappear. Seventy thousand high tides later, our wings get tired. We can't fly any further. Are you still with me?

The storm is becoming more severe. Far in the distance there's something trembling across the dark sky, it's a skein of geese coming from the south. They are looking for their feeding ground, struggling against the wind, their weak wings failing, barely advancing. A goose falls behind the flock. Energy drained, he is circling down, down into the sea. Rest now.

We must go back, faster and faster, seventy thousand high tides earlier. We're flying above the tranquil Halligen (1). It's low tide. People are adjusting the area to rising levels of the sea with nourishments of sand. They are extracting sand from offshore sites in the North Sea and transporting it to sediment deficient inshore locations inside the Wadden Sea. This sand helps diversify shoreline configurations in the form of sand bars, sandy hooks and dunes, ensuring both the protection of people and their goods, and the protection and creation of habitats for the birds. The Wadden Sea is growing, better able to adapt to the rising sea level. In place of a permanently flooded landscape we see young, evolving habitats, constantly transforming and renewing themselves. Nature must have free play again.

I hope you enjoyed your journey. Now don't stop flying (2). 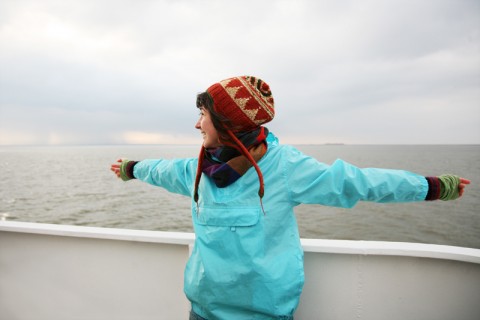 Adela was one of 21 young people from 15 European countries who participated in the Wadden Sea Climate Training, from 23 to 28 April, and got the opportunity to experience first-hand the world's most important inter-tidal zone on the frontline of climate change. The training, organised by the British Council in collaboration with experts from UNEP/GRID-Arendal (a collaborating centre of the United Nations Environment Programme), and with the support of Youth in Action, took place on Hallig Langeness, a low-lying island in the Schleswig-Holsteinisches Wattenmeer National Park (Germany). The region is an important testing ground for policies and measures to adapt to climate change, the effects of which are already being felt in the ecosystem.

(2) In your flights always avoid aeroplanes.