In October two fellow 'FOEs' and I took an expedition up to Celbridge, Kildare to meet an organic farmer. Nathan was his name and he was by no means your average farmer. With flowing long locks of rebellion-to-the-norms hair and a semi-bleak attitude to the general state-of-affairs. Nathan is what I would call 'a farmer by intention'. He is not farming because it was his obsession since childhood or because he wants to get rich. The type of work he is doing is making a social and political statement. I really respect Nathan and farmers like him.

He was very kind to show us all around the farm. I made a little video myself, just documenting the farm tour:

Nathan's farm is a 'Community Supported Agriculture' project (CSA) In a CSA the farmer works the land and the consumers are investor-members, who pay a fee in advance. The members' money provides a wage for the farmer/s and covers the running costs of the farm. In return, the members receive food, usually a box of vegetables per week. Members are invited down to help on harvest days and various social events are run throughout the year.

I was impressed at the level of organisation and work invested. When I first saw the farm, it looked to me like an untidy field with a few polytunnels. Walking around, I learned that everything had a place and a reason for being there. Such as the plastic wraps over the crops, the irrigation supply basins, the compost heaps and the little wooden shelter. Just because it isn't run for profit does not mean it isn't efficient! 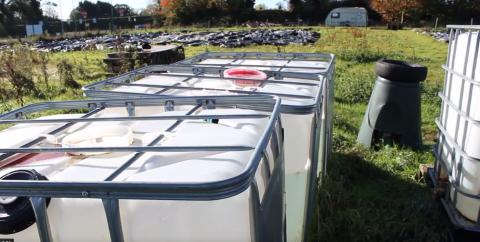 Next we sat down and I carried out an interview. We turned an amateur polytunnel into an amateur studio - and it was great fun. Reamonn was our cameraman who helped us battle the sun-in-our-eyes problem, to no avail. Aideen was support-crew who fed us encouragement along the way.

I dived right in by asking Nathan what he thought Irish farmers could do to improve the Irish agriculture situation. He told me "in reality there isn't a lot farmers can do" He explained that the majority of farmers in Ireland find it really hard to make a profit. Most of them are also receiving CAP subsides, (Common agricultural policy, EU). This policy aims to make the land as profitable as possible and as a result condones intense farming practices, which aren't necessarily sustainable or healthy for the land. Farmers are too busy, too poor and too locked-in to inadequate farm schemes to shake things up. So who takes responsibility? Well, according to Nathan, Everybody else.

We as society have to redraw our farm policies and schemes. It is all of us who will be eating the food, so why shouldn't we all have a say? 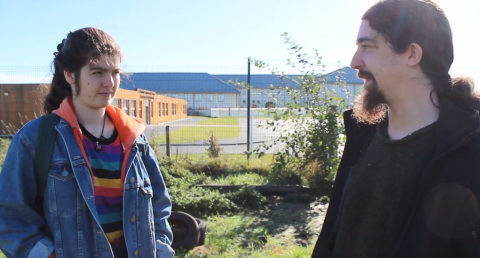 What is wrong with these policies anyway?

Well for one they are too industrial. Our food system is one which pumps out massive supplies of food without recognising that the land is something which depends on diverse ecosystems to survive.
Intense industrial practices such as monocultures, clear-felling, overgrazing and overuse of chemicals - are having detrimental effects. By driving out plant, animal and microorganism species, we are ridding the land of biodiversity which means sicker crops and livestock. Sicker crops and animals pushes farmers to use more agro-chemicals and alas, the cycle continues.

Another thing about industrial agriculture is that destroys beautiful landscapes. The natural world is full of astonishing features and bursting with life life - a place of sublime. But the current agricultural system is wiping these landscapes clean and replacing them with field upon field of wheat and hectare upon hectare of pastureland. Our complex, beguiling world is being hammered down into plains of lifeless sameness.

To make it all worse, we aren't even going to these extremes for the aim of 'feeding the world'. With more food than ever, starvation and hunger still persist. If the food system were fair, food security would not be an issue. But because farming is run as a business, the intention behind farming is not feeding people and it is not protecting the land - so these things will not be prioritised. Only profit will. In other words only a small proportion of people benefit from this stripping bare of the land, so there is no excuse really for letting it continue.

Those of us who have the power, time and money to change our fault-filled ways of doing things, are just a bit too comfortable. We have cheap food, cheap entertainment, cheap clothes, cheap life. We may not like our jobs very much. But hey, nothing is so bad that we are going to go upturning tables and chairs about it. But as for everybody else - the poor farmers, poor factory workers, poor street merchants, poor families - they have to suffer our cost. And at the end of the day they are too tired, too poor, too powerless to go upturning the tables and chairs that we should be.

Social revolution of some kind, we concluded, is necessary for the scale of change we need, to bring the world back from the brink. But it the meantime the best we can do is focus on the CAP Reform of 2020, and make sure we get the best possible outcome. Essentially farmers subsidies need to be way more ecologically based. Currently only 30% of pay is contingent to ecological measures, and of these it is easy to get away with things that aren't all that great. For example 'maintaining permanent grassland', rather than planting mixed grasses or trees, Or the establishment of notorious coniferous plantations instead of renewing diverse deciduous forestry.

We need to work together

Another idea Nathan and I touched on, was communication between environmentalists and farmers. We both agreed that environmentalists, while they want to save the world and do good, aren't always the best at considering people's situations. It is not helpful to attack or chastise farmers. You are not doing their hard work, you do not understand farming as much as they do and your income does not depend on what theirs does. It is possible for environmentalists and farmers to work together, and indeed they should. But environmentalists need to have understanding and respect. They must build relationships and community rather than trying to force farmers to change their ways.

So by the end of the chat I felt very good, because if merely talking to a farmer counted as contributing to a better future, well that is just what I had done!
Coming home from our trip, we had a great buzz about us: Reamonn, Aideen and I. We set up a sub-group for our youngfoe group called 'farmer-expeditions' For the very idea that we had arrived at with Nathan. Simply talking with farmers, of all types, building relationships trust - is an action in itself, and it is an action that we need to begin to revolutionize our food system.

Our next expedition will be coming up at the end of the month, and hopefully there will be many more to come! 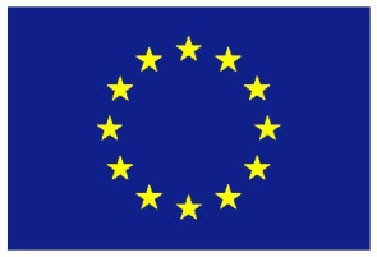 This project has been funded with support from the European Commission. This website reflects the views only of the author, and the Commission cannot be held responsible for any use which may be made of the information contained therein.