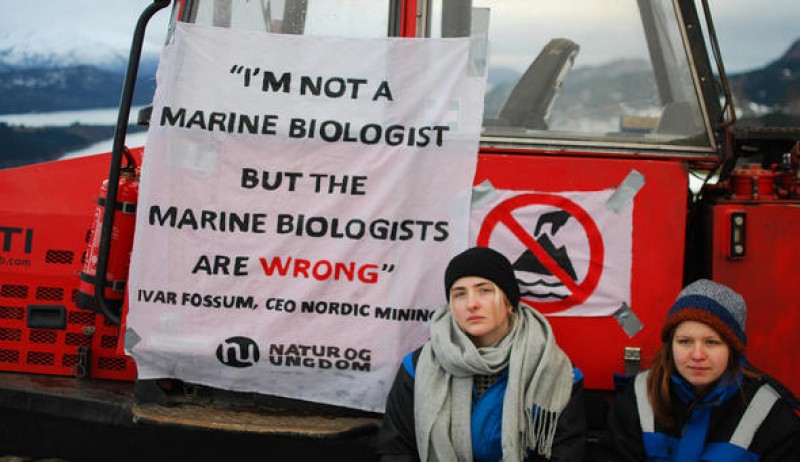 Førdefjord activists will not be sued by Nordic Mining

Tina Andersen Vågenes, member of central board at Young Friends of the Earth Norway (Natur og Ungdom) gives us an update on the recent law suit filed against peaceful Norwegian activists who staged a 3 week long blockade to protect Førde fjord from mining activities.

In February, more than 100 people participated in civil disobedience actions to stop test drillings on the Engebø Mountain, near Førdefjord in Western Norway. Over 80 people were arrested, and have received fines that total 100, 000 pounds. The actions lasted three weeks, and protested the controversial mining project, that will allow 250 million tons of mining tailings to be disposed of in the fjord. As the actions ended, Nordic Mining’s CEO Ivar Fossum announced a multi-million lawsuit the peaceful activists. The 80 people who were arrested for the actions are between 16 and 70 years old, with most being students and volunteers. Yesterday, Monday 4th of April Nordic Mining announced that they will not pursue a lawsuit, claiming it will be “lengthy and costly”.

After Nordic Mining got permission from the Norwegian government in April 2015 to start a rutile ore mine from the Engebø Mountain and dispose 250 million tons of mining tailings in the Førdefjord there have been massive protests. Marine biologists fear the tailings will harm life in the fjord. Especially coastal cod, wild salmon and blue ling are in danger. On a yearly basis, the permit also includes 1,200 tons of sulphuric acid, 1,000 tons of sodium, 1,000 tons of phosphoric acid, 360 tons of carbonic acid and 90 tons of acrylamide. The tailings will raise the seabed by 150 meters, and will cover parts of spawning areas for several endangered fish species. Locals have protested the plans of open pit mining from the Mountain and a large disposal site in the fjord. Several families in the local community of Vevring plan to move away from the fjord if the mine is built. Currently over 2,200 people have signed their names to a list threatening to use civil disobedience to stop the mining plans if they continue.

During the three weeks of actions in February, activists stopped drilling work for up to 12 hours a day, before a 24-hour blockade on the last day. The support was enormous – together over 30,000 pounds was raised to support the activists, and a donation campaign to help pay the fines has been started. Locals came up to the mountain every day with messages of support to the activists, and took young activists into their homes.

After the actions ended, Nordic Mining CEO Ivar Fossum stated he wanted to sue every one of the activists. As a response, a petition was started at change.org, urging Nordic Mining to drop the lawsuit. Almost 6,000 people have signed this petition. The organisation Earthworks gathered over 7,000 people to send an email to Nordic Mining’s Ivar Fossum, telling him to drop the lawsuit. The powerful messages of solidarity support from Young Friends of the Earth groups in Brussels, the Netherlands and Croatia have sent a strong message to Nordic Mining. Now that Nordic Mining has decided not to pursue legal action against the activists, it is a victory for the campaign.

Young Friends of the Earth Norway would like to thank everyone who participated, either by signing a petition, sending an email to Nordic Mining or by spreading the message. We are now convinced the struggle to protect Førdefjord stands stronger than before.

Check out savethefjords.com for more information about the actions and campaign, and how to join the struggle to protest Nordic Mining’s devastating plans for Førdefjord.