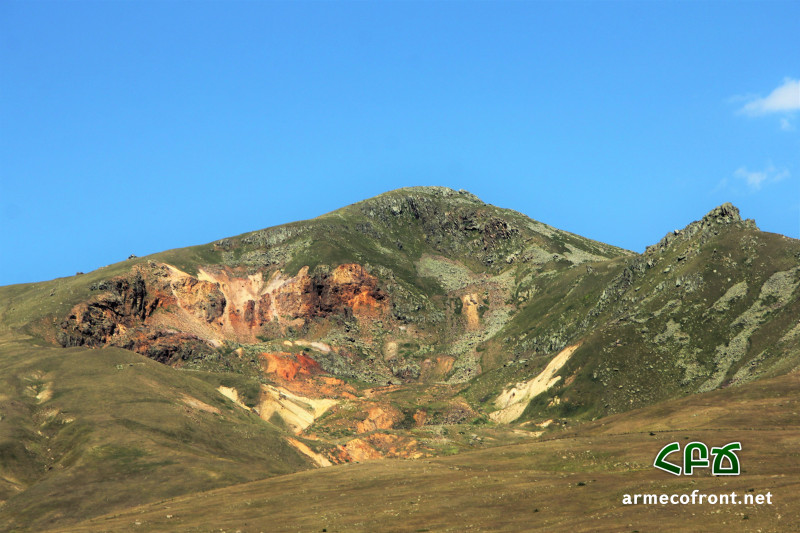 The Amulsar mine in Armenia. Photo credit: Armenian Eco Front

Mikayel Hovhannisyan, a member of YFoEE's food and agriculture working group, warns of the huge dangers posed by the Amulsar gold mine in Armenia, which he is campaigning against.

Local groups in Armenia, including the Armenian Environmental Front, have been organising against a large gold mine project on the Amulsar mountain, in the South-East of the country near the Turkish border. The mine poses major health and environmental risks to the local communities and is owned by an offshore company based in the UK's offshore island of Jersey.

The company, Lydian International Limited, is a mineral exploration and development corporation that is involved in several exploration projects in Armenia, including the Amulsar gold mine. 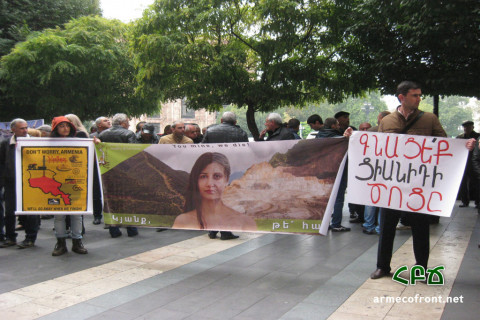 A petition calling on the government to reconsider the permissions given to the project and for the International Finance Corporation (IFC) and European Bank for Reconstruction and Development (EBRD) to withdraw their funding for the project has gained nearly 8,000 signatures. The EBRD have bought major shares in the company, and have a reputation for investing in destructive fossil fuel projects such as the Trans Adriatic Pipeline. The International Finance Corporation (IFC) had been a 7.9 percent shareholder and invested over 13 million USD in multiple stages since 2007, however they withdrew their finances in May 2017. There are other shareholders too, such as the U.S., Canadian and European investment funds.

Lydian expects to extract annually some 10 million tons of ore containing 7.8 tons of gold from Amulsar gold deposit for the rather short period of eleven years. The Amulsar license covers a total of 65 km2. Initially it was planned that around 426 million USD of capital investment would be spent on the project during the first two years. According to Lydian's calculations, over the life of the mine it will contribute around 488 million USD to the state budget through taxes and royalties. Its total contribution to Armenia's GDP annually will be around 185 million USD or 1.4% of GDP.

The Amulsar mountain is located some 160 kilometers south of Yerevan, Armenia's capital, on the border of Syunik and Vayots Dzor regions. It is 12km away from Jermuk Resort City and 5-7 km away from the villages of Gndevaz, Saravan, Saralanj, Kechut, Ughedzor and Gorayk. The gold will be extracted from the ore with cyanide. This process is called heap leaching and is considered dangerous. The heap leach facility will be located in Gndevaz village just one kilometre away from the residential area.

According to environmental health experts, both cyanide, as well as the dust caused by blasts in this open-pit mine contain risks for the environment as well as human health, such as damage to respiratory systems. They highlight that lead emerges in similar mining activities which affects nervous and blood systems, increases mortality rate and causes birth defects. Dust containing cyanide could travel about 30km in radius, accumulate in plants, penetrate the animal chain and human bodies. 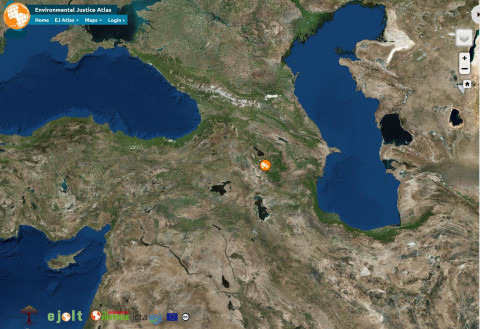 More on Amulsur at EJOLT – the environmental justice atlas

The Amulsar mine also risks the country's water resources because all the mine infrastructure will be distributed in the Arpa and Vorotan River catchment and nearby Kechut and Spandaryan Reservoirs, which in turn lead to the Lake Sevan basin. During the mine operation, liquids saturated with a new type of toxic metal compounds will be dumped into the Vorotan-Arpa tunnel, which then will be transferred to the Kechut Reservoir, and from there the liquids will flow into Lake Sevan via the Arpa-Sevan tunne, fundamentally changing the composition and quality of the lake.

The Amulsar project also carries significant risks for the Jermuk Resort City, a mountain spa town famous for its hot springs, mineral water and beautiful landscape. Jermuk is a centre for tourism and health services and is located only 8 km away from Amulsar. As a result of the mine exploitation, it will lose its status as a health resort and the majority of the population in the area will end up unemployed. It is also not possible to control the impact of thousands of explosions carried out during the mining process on the mineral resources of Jermuk.

The work schedule and time frame for the exploitation of the mine has been determined already. The Republic of Armenia has given permission to produce a total of 10 million tons of ore annually for a duration of 10.4 years. However, such a mine should have never been allowed to exploit or in necessary cases should be exploited in at least 120-150 years.