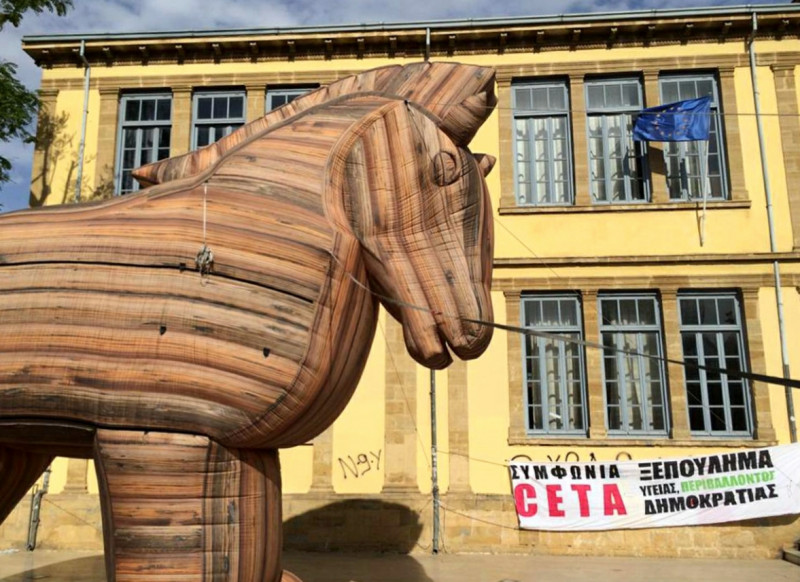 With CETA currently in the ratification stage in countries across the EU, YFoE Cyprus toured am huge inflatable 'trojan horse' through the mountains and the cities to raise awareness about the hidden dangers of the free trade agreement.

For the past few months YFoE Cyprus have been using the huge prop to raise awareness about the hidden dangers of Free Trade Agreements such as CETA and JEFTA. From the mountains of Troodos to the city centre of the capital of Nicosia, the Trojan horse attracted the public, who were then informed about CETA by YFoE Cyprus activists.

The Canada – EU trade deal that has been provisionally applied last autumn, is now in the process of ratification by national parliaments throughout the EU. YFoE Cyprus is actively engaged in lobbying of MPs and other stakeholders, having obtained the support of all farmers and workers' unions of the country.

One of the most controversial parts of the agreement is the Investment Court System (ICS), a private dispute settlement system, almost identical to its precursor and highly controversial ISDS. The latter has been used in the past against the government of Cyprus, with one of the most appalling cases, being that of a financial group linked to the economic collapse and haircut in the country, suing the government for more than 800 million euros, right after the economic crisis. The fact that this power is being given and abused by corporations in an attack to the rights of people has raised serious concerns about CETA and other agreements of this kind.

For us, it is clear that it should be "Rules for Business, Rights for People" and not the other way around.