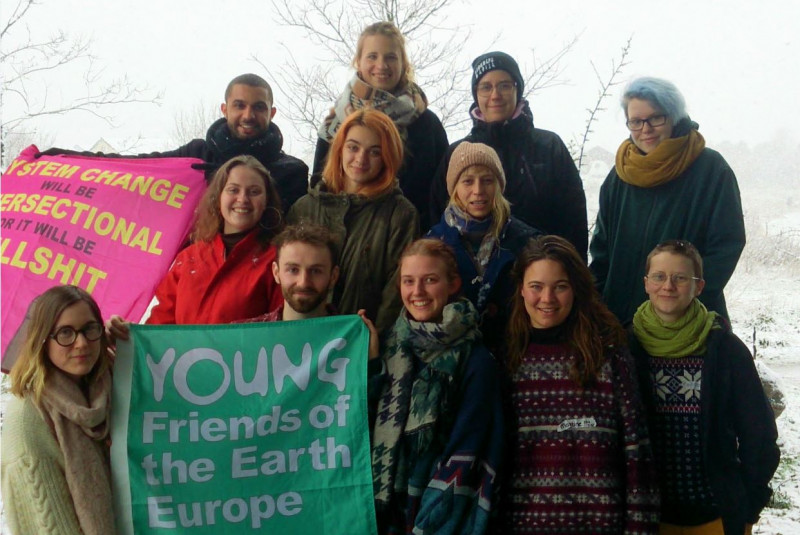 Our network is coordinated by the Young Friends of the Earth Europe Steering Group, a group of volunteers elected during the Annual Network Gathering (our key decision-making event). Together the steering group are responsible for managing the ongoing work and development of Young FoEE, including long-term campaign strategies and goals. In addition, each member is responsible for a different area of work and supporting member groups in our network.

Read more about who is in the Steering Group, what area of work they are responsible for and how to get in touch with them.

In her second term in YfoE Steering group, Matilde spends most of her time in Yfoe Norway’s office, both to work and to hang out with her friends there. When she’s not in the office she studies gender studies. Besides she loves listening to music and spending time with her friends and family. Climate justice is very important to her, so she finds it amazing to be part of a network where climate justice is in the core of the work. She looks forward to another term in the steering group! Contact Matilde

Ana is an activist from Zelena akcija/Friends of the Earth Croatia. She has been a Steering Group member since 2017. Since the beginning of her activist path, she has been motivated to work as a facilitator, empowering young activists to make a positive change in the society. Main focus of her campaigning is waste management (single-use plastic and zero waste). She can't stand any form of injustices and promotes the importance of intersectionality and feminism in environmental movement. She is very motivated to work on the topic of sustainable activism as fighting climate change can be very emotionally draining on long terms, so celebrating and acknowledging small victories is of high importance. Contact Ana

Iosef, 26, has been involved with Friends of the Earth Cyprus since 2015 and is a member of the Friends of the Earth Cyprus board. He is also an active member with Young FoE Cyprus and he is working on local issues. Iosef is mostly interested in connecting environmental and social issues such as Intersectionality. Outside of activism, he is currently doing his masters on water technology and he is an external research assistant of AQUA - Water Treatment Laboratory (WTL). He likes hiking, camping in nature, and dancing latin. Iosef is running for the 3rd year as a SG member and together with other working groups and the YFoEE coordinator Iosef is working on fundraising and financing in the network. Contact Iosef

Helene grew up looking up to people. To decision-makers, to leaders, to people who voice their opinion. They were role models to her. But now that she got to know the climate movement, she realised that she doesn’t have to look up to them or make herself smaller than she is. She can learn from their experience and still admire their aims and solutions but she can also stand her own ground without having to rely on “people up there” to make decisions for her. She doesn’t have to rely on other people to voice her opinion. She can try to be a role model for herself and for other people and she can try to make the world a better place. ‘All of us together can be leaders in promoting the change we want to see in the world’, she says. Contact Helene

Linne likes working with the structures of organisations. That is why they wanted to be part of the YFoEE Steering Group. Besides structures, they like to play pop and old Danish songs on my piano, to read queer litterature, to wear loads of woll, to talk about complicated things until they make even less sense than when the conversation began and to be in nature. Linne also enjoy biking through the late Danish summer wearing my clumsy blue helmet. When they are not in Ungdom NOAH, YfoE Denmark, they work with children, while they figure out what they want to do with their life. If you find out what education they can get to learn how to save the world please write them a message. Contact Linne

In her second term in the Steering Group, Ieva is a political science student who cares deeply about environmental and social justice. Special interests include feminism and LGBTQIA+ matters, so she is a big fan of intersectional ways of thinking, working and beyond. Identifies with Tina from Bob's Burgers - way socially awkward, but if she's passionate about something, she's REALLY passionate about it! Contact Ieva

Martine, from Jongeren Milieu Actief/Young Friends of the Earth The Netherlands,identifies hersef with a chameleon as she likes many different colors and adapts easily in different groups. She holds a Masters' degree in International Public Health and is very interested in the relationship between the health of the earth and the health of the people. Climate justice is very important in understanding these relationships in our fight for an equalized world. She believes that being a chameleon will bring you to beautiful places and beautiful people. She is looking forward to learning from her fellow Steering Group members, from the extended network of YFoEE and from all people that are somehow engaged with this beautiful network! People, power, now! Contact Martine

Ivana has been involved with Young Friends of the Earth for 9 months and loves being an activist. Her favourite topics are on solving plastic waste and reusable energy even though she is willing and happy to learn about any topic that's related to climate change problems! Contact Ivana

Lita is involved with Young Friends of the Earth Latvia/Liber populus. Discovered her passion for activism through School of Sustainability and since then the passion has only grown. Deeply interested in social justice, human rights and climate justice. Mostly identifies with a rock. No matter how big or small each of them are special and beautiful in their own way, but also constantly changing. And that's what Lita sees in people. Everyone can change and be a better version of themselves. Contact Lita

Tonje has been a member of Young Friends of the Earth Norway for about a decade. She works with children and collects university degrees in her spare time, gotta catch ‘em all! Tonje has always been interested in nature, a side effect of growing up in the forest. Having always been concerned about biodiversity she has in recent years opened her eyes to how climate change affects people differently and so unfairly. If you ever want to find her, look to your closest mountain top where you might find her contemplating how some people think reducing emissions can’t be done without harming nature.Contact Tonje