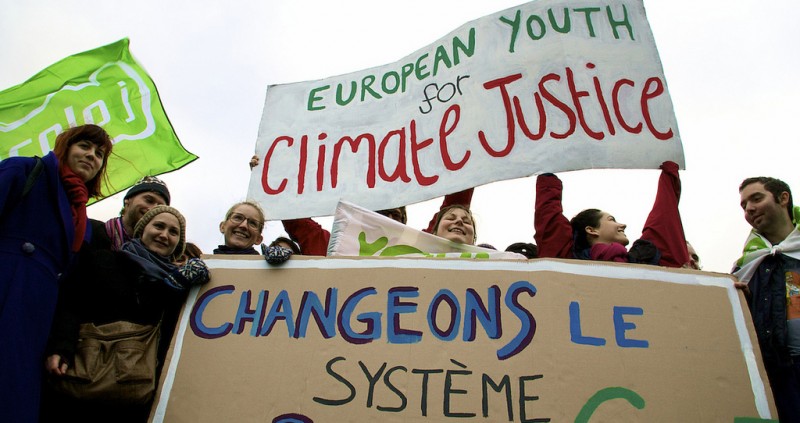 Climate Justice not climate chaos, one of our demands for new Members of European Parliament (c) Conrad Richardson

What we ask of new Members of the European Parliament

Young Friends of the Earth Europe, is asking that newly elected members of the European Parliament take the following points on climate justice and food and agriculture into consideration in the next five years, if they are (re)elected to the European Parliament. It is high time to ACT in order to ensure a socially and environmentally just and sustainable future.

Young Friends of the Earth Europe wants to see a significant shift in the policies of the next European Parliament to fight climate change and the social issues related to it:

1. Say NO to business as usual.

2. Say NO to false solutions to the climate crisis: no to nuclear, no to shale gas, no to CCS, no to large scale hydropower, no to agrofuels, no to offsetting, no to carbon trading, no to industrial system of farming and new technologies - modern bio-technology used for the production of genetically modified crops, no to market-based forest conservation systems (REDD) and no to geoengineering.

3. Bring forth real solutions like: keeping fossil fuels in the ground, investing in renewable energy systems owned and operated by communities, energy efficiency and savings, sustainable models of farming based on agroecology.

5. End the dominance of the financial sector and especially fossil fuel business lobbies at all levels of the legislative process; avoid conflicts of interests and stand up for democracy and not big business.

6. Put people first and not profit, by supporting citizens' right to information, transparency, and participatory democracy by getting people involved in all stages of the decision-making process regarding climate legislation.

7. Put climate justice on the agenda - justice for poor countries in the Global South, and a fair distribution of wealth and accepting the historical responsibility of the North.

8. The economic crisis is proof of the unsustainability of our current system - The European Parliament needs to promote the benefits of a real transition towards a sustainable and renewable model: job creation, restoring democracy, community power - decentralisation of energy systems which are now mostly in the hands of big corporations, energy sovereignty, improved air quality and health, a better quality of life.

Climate change is a global problem, and the European Union needs to take account of its historical responsibility for contributing to climate change as well as take its fair share of action for stopping climate change. Europe is already experiencing its consequences - rising sea levels threatening our coastlines, droughts in the Mediterranean region, devastating floods and ice storms in Central Europe... The urgency is clear.

At the same time concerned citizens all over Europe are taking action for our climate in their own way: bravely resisting destructive shale gas explorations in the UK, Republic Of Ireland and Romania, opposing dirty coal fired projects in the Balkans and Poland, rallying people against false solutions like nuclear energy in France, and passionately realising clean and democratic alternatives like solar power in Germany. People are taking action on local, national and regional levels. The public pressure on European decision makers to take action on climate change is crystal clear, and the science is louder than ever before!

People want change because it is us - the local communities, women, youth, workers, migrants - who will be, and already are, feeling the catastrophic social and environmental consequences of climate change.

Europe's current model of farming and food consumption is destroying the environment and threatening human health. It is not a fair or sustainable system for us, for farmers, for the environment or for the future.

Young Friends of the Earth Europe believe that a transition from industrial agriculture to a sustainable model is urgently needed. We need:

1. A system based on small and diverse sustainable settlements;

2. Redirection of subsidies to small-scale, biodynamic and organic farms that protect the wild environment as well as biodiversity;

3. A ban on the production and importation of all genetically modified crops, animal feed and food products;

4. Increased taxes for fertilizers and pesticides so that all external costs are included, including water pollution, degradation of ecosystems, loss of biodiversity, and social costs;

8. Traceability of products enabling people to make informed decisions about the food they purchase;

Intensive factory farming of livestock wastes fertile land by necessitating the production of large amounts of animal feed, pollutes the environment and endangers public health, favouring the increase of dietary and nutritional diseases. Agro-corporate lobby groups are taking control of the seed market and actively build barriers for small-scale farmers to enter the market. Lack of knowledge and current consumerist lifestyles mean most people go to chain supermarkets and buy food without considering their choice. And while 89 million tons of edible food is thrown away every year in the EU, hunger is still the world's ﬁrst health risk, especially in developing countries.

But the transition from industrial agriculture to a sustainable model is beginning through the establishment of small-scale, biodynamic and organic farms, eco-villages, urban gardens and seed banks all over the world. Increasing the number of farmers' markets, rural food fairs, food cooperatives, community supported agriculture schemes and food exchange projects will create closer links between buyers and producers and create conscious, well-informed and involved people who consider every positive gesture as a small action contributing to a sustainable system of food and agriculture.

People are the ultimate decision makers in the food market and it is vital that European legislation encourages and enables people to make the right choices!