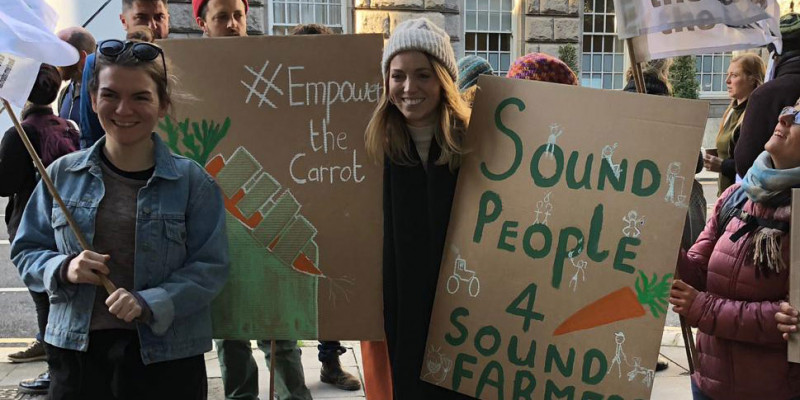 #GoodFoodGoodFarming month of action in Ireland

Across Europe, thousands of people took action for #GoodFoodGoodFarming last month. Here's what Young Friends of the Earth Ireland got up to.

***
This month we are celebrating the Good Food Good Farming Days of Action as part of our Growing Together project by championing the changemakers who are shaping a fairer food system here in Ireland.

We began the month of action by going west to Mayo to host the two day 'The Future is Rural' sustainable rural futures fair in partnership with the Irish Environment Network and Foodture in the Museum of Country Life in Castlebar, County Mayo.

The weekend was launched on Friday night with a screening of the documentary "In Our Hands – Seeding Change'. Seeing as the day began with a hurricane we were absolutely blown away by the turnout on the night with people sitting and standing in the aslies of the cinema room.

Following the film screening we were joined by wonderful panellists including Fergal Anderson, organic farmer and member of Talamh Beo, and Saoirse McHugh from the Green Party. The evening was hosted by Sinead Moran, local farmer and co-founder of Foodture. The film sparked some interesting and dynamic conversations that have been recorded for the Foodture podcast. The evening came to a close with some stand-up comedy from Brida Larkin – a farmer from County Galway.

Saturday's events consisted of film screenings, workshops, forest walks, panel discissions, a farmers market and much more. The day was broken into five thematic hours, focusing on: soil, seeds, growth, eating and power. During each thematic hour there was a film screening, a panel discussion and workshop relating to the theme to give attendees several options to engage with and consider each topic. Some key speakers included Dave Beecher the Soil Preacher, Kate Ruddock and Triona Reid of Friends of the Earth, and Nathalie from Good Food Good Farming.

We spoke on a panel about activism at the Young Greens Annual conference where we encouraged young urban dwellers to get behind their small sustainable farmers and demand a fair food future for all.

Following this we also hosted two films and two banner painting sessions in preparation for the launch of Talamh Beo, a new farmer-led activist group outside the Dept of Agriculture.