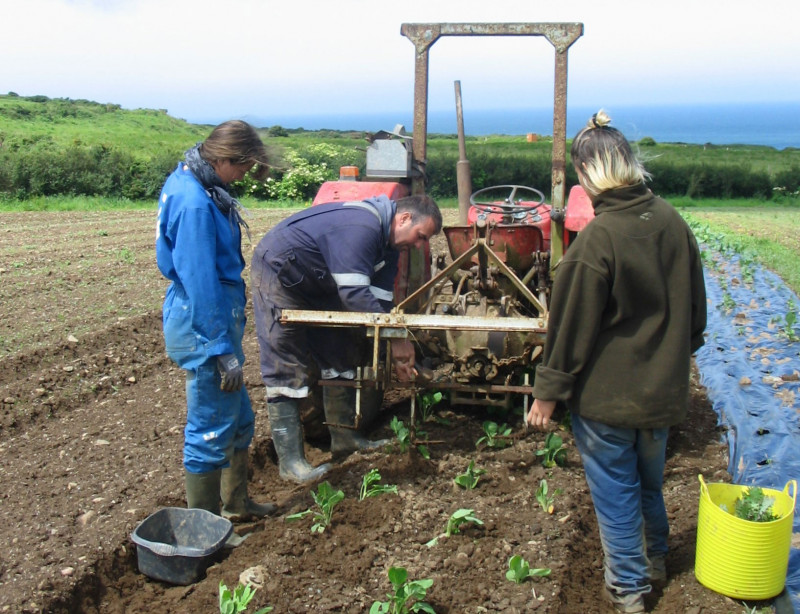 Hello Earth, this is Wales: our agri-activism volunteers return

Last year, four young people from across Europe spent the summer volunteering on a cooperatively-run organic farm in Wales, learning first-hand how sustainable local farming works, and how to campaign against GMOs and pesticides at the local level. This summer, the project is back – and our first volunteer, Juta from Estonia, shares her first impressions of life on the farm...

Hello Earth, this is Wales.

I noticed going through miles and miles in England in that you do not have evergreens. We have it Estonia plenty, so the greenery is both light green from trees with fresh leaves and dark green from evergreens. But when it comes to Wales, the dark green is added with certain bushes that you can see on the hills.

Caerhys Organic Farm is run by restless Gerald, responsible for the office side, and hard-working Caz, who is Gerald's youngest son, responsible for the labour side, including mentoring the volunteers. I am here as a volunteer from YFoEE to learn how to be active in environmental struggles in the public (with protests fighting against glyphosate) and both in the field (with farm work fighting against wind and weed).

Gerald is my teacher in the school on agri-activism, by sharing articles on risks of GMO-crops and weed-killers with glyphosate in it, and he involves me in green actions and meetings. Btw, you can always recognize Gerald by his straw hat. In the main farmhouse, which is built in 1864, we have a meeting with Gerald once a week to plan a campaign against glyphosate "being sold as sweets" (meaning "easily-accessible") in the supermarkets. Furthermore, there is also lovely Ann, Gerald's wife, who mostly runs the Bed and Breakfast.

At the end of the last century they had a lot of potatoes and a dairy herd here, but nowadays they have a Welsh Black beef herd mainly harvest Swiss chard and salad. This farm plays a big part in Caerhys Organic Community Agriculture (COCA), supplying local people (55 families) with organic vegetables. The COCA webpage says that it helps to reduce "food miles" if everything is local, and of course everything is grown organically, so the veg box is full of colourful healthy veggies. In fact, Gerald's farm gained their organic licence already in 1998. Volunteers through EVS and WWOOFing and me from YFoEE are here to plant, weed and be good caretakers so that in the end of the week days to harvest veggies and pack everyone's shares of vegetables.

At the moment there three other people doing long-term volunteering on the farm. Some volunteers have said they like this farm because it is big enough to have many volunteers at the same time, so there are more potential friends to do activities outside the farm work. There is always a couple of friendly local people who are helping on the day of harvest, and the day ends of course with British tea with milk.

My life in the farm started on the night of the 17th May 2017. I have lived in countryside, but only in my childhood. I have lived beside the sea before, e.g. in Tallinn and Reykjavik, but never so near.

Over the next weeks, I'll be sharing some thoughts on my experiences living here at the end of nowhere, at the start of something new in my life – the life of young green activist.

More on our agri-activism project