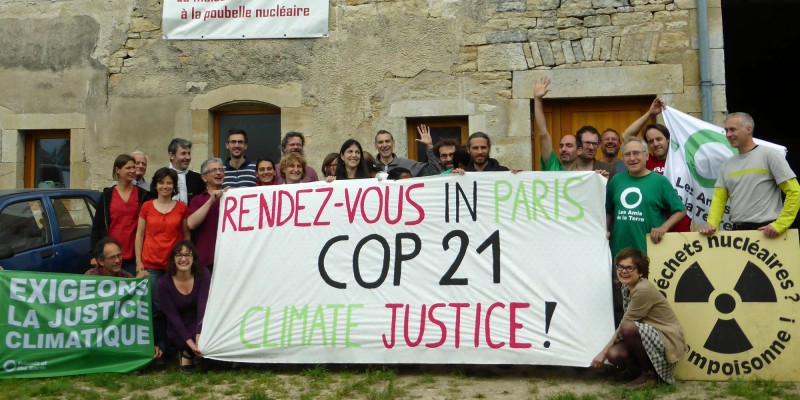 COP21 in Paris and beyond

Join us to take action around this year's UN climate talks

This December will see the annual UN climate talks – the COP21 – in Paris, and Young Friends of the Earth Europe will be there to follow the negotiations and push for climate justice. The talks begin on November 30 and conclude on December 11, but there will be much, much more than policy negotiations going on. Along with grassroots climate and social justice groups from around the world, we will be making our voices heard across the city, making sure world leaders from the global north hear the call to face up to their historical responsibility for driving the climate crisis and putting justice at the heart of the talks.

This December will be the 21st year that the COP (the Conference of Parties) has met, in which governments from around the world meet at UN talks with the mandate of working towards global action to combat climate change. Read our two-part catch-up guide to the COP:

How can I take action in December?

If you can, please come and join us in Paris! If you're interested in taking action this December, there are three ways to go about it (even if you can't get to Paris):

If you are free for the first week or two of December...

Come to Paris for as long as you can between November 30 and December 12. If you can, make sure you join for the final weekend – the biggest mobilisations will happen on the 11th and 12th of December. If you are involved with a national Young Friends of the Earth group, get in touch with them to see what their plans are, and find information on cheap and environmentally-friendly ways to travel and stay in Paris here.

Make sure you're attending the Facebook event for the People.Power.Action. Friends of the Earth International mobilisation on November 11th. Because of the heightened security situation in Paris, outdoor mobilisations are now limited - we will instead be meeting inside.

If you can only join for a few days...

Join many thousands of people for the big mobilisations on December 11th and 12th as the talks close. Again, get in touch with your national group to find out their plans, and find travel/accomodation information here.

In the meantime, follow Young Friends of the Earth Europe on Facebook and Twitter for more up-to-date information on mobilisation plans and ways to push for climate justice in Paris and beyond!