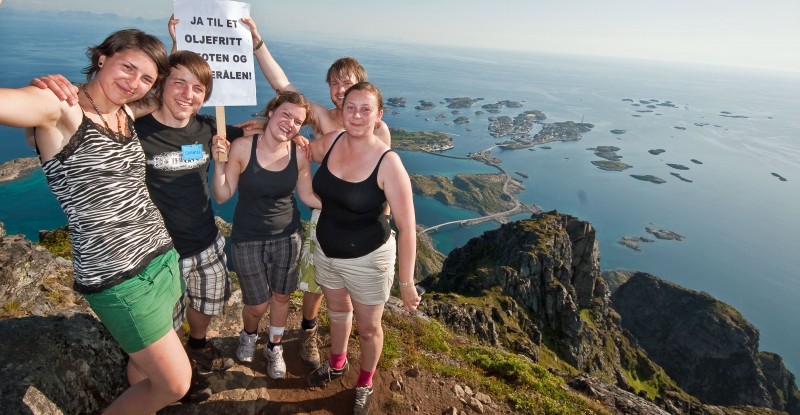 International Youth Demands No Oil in the Norwegian Arctic

This week 400 youth from all over the world are gathering in the high north of Norway to demand that Norwegian authorities protect the pristine areas outside the Lofoten Islands against oil and gas exploration.

Norway is seen by many to be a leader among industrialized nations in the process towards a just and effective international climate change agreement. However, the Scandinavian country does not practice what it preaches. The country's high per capita emissions is because of the ever growing oil and gas exploration in the country, and for the last twenty years the oil industry has been pushing for a opening of one of the worlds most vulnerable areas, the areas outside the Lofoten Islands. If the Norwegian government were to open the area for oil exploration, they will defy all environmental concerns, the majority of the Norwegian population and the last shred of climate leadership will be stripped from Norway.

"If Norway, as one of the richest countries in the world, were to show that not even the valuable and unique areas of the Lofoten-islands are "off limits" for the oil and gas industry, it would set a disappointing precedent internationally", says Silje Lundberg, Leader of Young Friends of the Earth Norway, host organisation of the camp.

If the world is to be effective in preventing dangerous climate change, a large portion of the available fossil fuels needs to be left in the ground. In this situation, avoiding oil and gas activity in some of the world's most sensitive and biodiversity rich ecosystems should be an easy choice. The pristine areas offshore of the Lofoten Islands archipelagos in the Norwegian Arctic are among these valuable ecosystems. The area holds unique cold-water reefs, pods of sperm whales and killer whales, some of the largest seabird colonies in Europe as well as being the spawning grounds of the largest remaining cod stock in the world.

Young Friends of the Earth Europe supports the call of local fisheries organizations and environmental groups for these areas to be protected from the risks and emissions associated with oil and gas activity. We call on the parties running for parliament elections to take a firm stand in this issue – do not allow the opening of the Norwegian Arctic for oil and gas drilling!

During the following week 400 young people from all over the world are setting camp in a small fishing village in Lofoten. Throughout the week there will be lectures on dirty energy and the solutions on the climate crisis, training for direct, not violent, actions to stop potential exploration rigs heading north, as well as a big rally in Lofoten on Saturday the 3rd of august. Here, all the parties running for parliament election will debate the future of the Lofoten-islands.