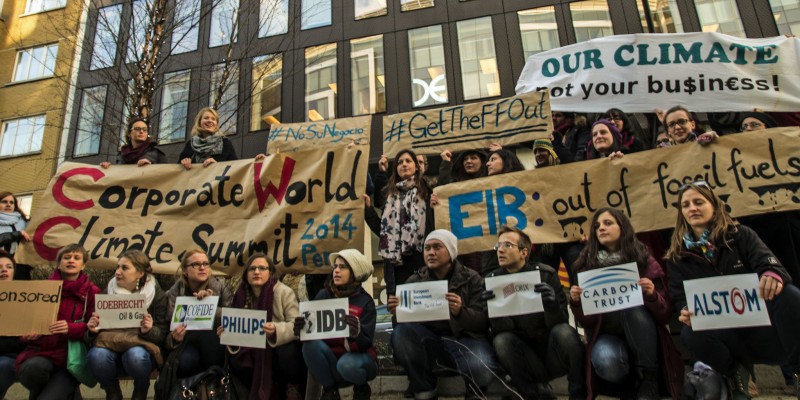 Protest outside the European Investment Bank

Today, we decided to call (and god, it was loud!) on the European Investment Bank (EIB) in Brussels to stop funding fossil fuel projects and false solutions to the climate crisis like shale gas, and to make a complete shift towards renewable energy investments. Why now – like, what has the EIB got to do with the COP in Lima? Well, you would not believe – the EIB is actually sponsoring a corporate climate summit in Lima, running parallel to the UN climate talks, promoting business driven, 'low carbon', false solutions. As a public instituton with a responsibility to European citizens and the environment, it should promote genuine, responsible climate solutions.

The action helped those of us who were preparing it, to learn how important reconaissance is when planning a protest. You do not want to come to protest to a bank and find out, at the last minute, that it actually is on the 6th floor, while on the ground floor there is a Catalunyan information center. Which is what happened to us...

Still, if you chant enough for the employees up there to hear you, it is actually possible, that someone will come down to hear your demands (yes, this actually happened!).

And the EIB certainly makes you wanna shout, as it is not all as nice as its individual employees - the EIB still lends three quarters of its research funds (around 10 billion euros annually) to the automobile industry in spite of its Climate Action Programme. What is more, efficiency improvements at coal or gas plants are categorised as climate-friendly when in fact they prolong the lifetimes of these polluting plants; any such improvements should be targeted at communities who live in energy poverty. And the bank's stance remains ambiguous on new forms of energy that are a threat to the climate like shale gas.

Our aim was to act in solidarity (yesterday was the great march to defend Mother Earth in Lima!) with Peruvian and other Latin American social and environmental movements. Transnational corporations are plundering the lands of Latin America and driving the climate crisis. Climate change is already happening and corporate actors have overwhelming power on the climate negotiations, promoting false solutions to protect their profit-at-all-costs business practices. People who are trying to stop the ravages of the system and defend their rights have been killed in the name of those same transnational corporate interests; however they represent only a fraction of those who climate change has killed and will continue to kill.

As we marked International Human Rights Day, we stood in solidarity with environmental defenders in Latin America and worldwide, and demanded that the EIB and other financiers divest from dirty energy and pour their resources into supporting real climate solutions like community-run renewables: it's our climate, not your business!