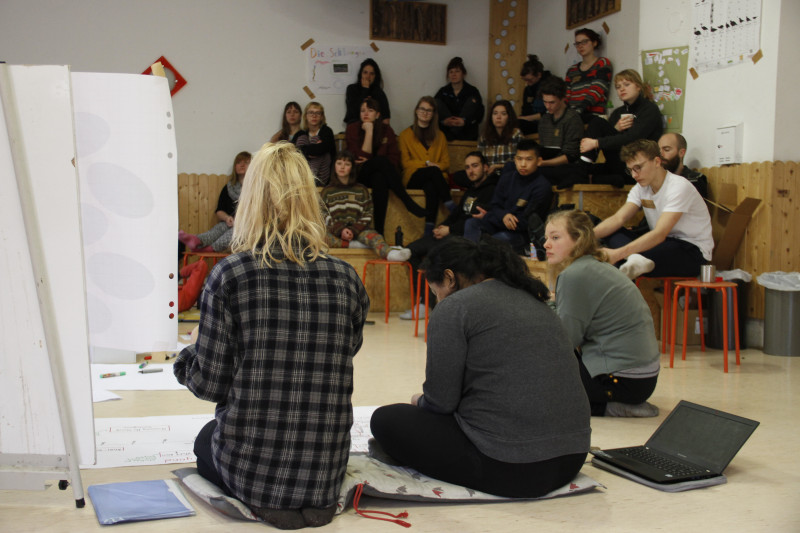 Reflections from the YFoEE AGM in Austria

Juta Kruusmäe is participating in the YFoEE annual meeting in Austria. These are her reflections after the first day.

It was the first day of AGM for me, but for many it was the second. A little place in Austria called Kritzendorf has greeted me well with it's beautiful colourful family houses and hills of green. It is the beginning of the spring, so accordingly it is chilly outside but the trees are showing signs of waking up with first leaves. The first thing I noticed, when I arrived at the venue, an scouting hall, was the large number of participants. There was a better balance in genders, there were more men than the last YFoEE meeting in Croatia. Most people were sitting on the build-in forum of steps like in sauna. Thursday was the day to go through what Young Friends of the Earth Europe (YFoEE) is, and its parent organization Friends of the Earth Europe (FoEE). The Steering Group also talked over the plan for the upcoming week. From other house rules we agreed with, I will share only one - you should feel comfortable in your learning zone.

We did some get-to-know-each-other-games and I already felt oh, yeah, there are so many older and soon-to-be-known captivating characters in the event. We also mapped what each volunteer's local green movement is doing and what are the plans of YFoEE different working groups. I liked the mapping part, as we are from such diverse social and environmental contexts, of course we have different green projects going-on. Gerald, an agri-activist and a farmer, told as a inspiring story of how of his close friend triggered him to start the eco-farm for the new generation of green activists. It was a good example how sometimes a tragedy can turn into something beautiful like the start of a new small revolution where activists together think how to leave the world a better place.

Later on the day we had a workshop put together by Equality and Interculturalism Working Group. They gave each group social problems, e.g. abelism and racism. We had to breakdown the problem into smaller pieces, describe the problems causes and symptoms. In the end we tried to see the similarities of the problems. We saw that the discriminated groups show give voice in the society, people ought too understand them through personal storied that you can relate to, not statistics. We must see the human being behind the special characteristics she/he might have (one is gay, one is disabled etc.), understand these people have also their own dreams and needs like we do. 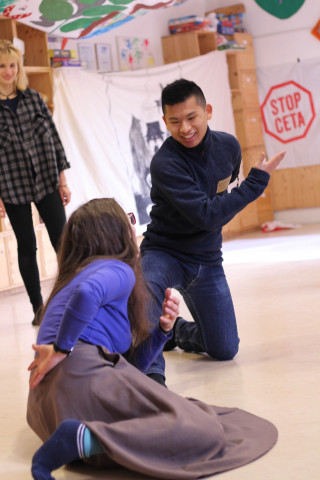 By the way, one has to give credit to the local chef who makes good vegan or half-vegan food with rock music playing in the kitchen. In the evening we had a multicultural night by the campfire. Youngsters had gathered the wood by themselves. In a circle we shared our national dishes, mostly sweets. Some told stories of their life or the life with YFoEE, others taught us tongue twisters. In the darkest hours we started singing together. Even one of YFoEE's song was introduced to the new people. It went something like this

The corporates are ruining our world. It's time for them to go.

They cut down all the trees, and sell us GMO’s.

People have no home to stay, so where should they all go?

We want more ambitious goals, we want it right away. Hey!

Global North has big duties to save us all from harm!

It was incredibly lovely how different nations but one generation sang together, knowing the same songs. For example you could have a Dutch, an Irish, an Estonian, a Croatian and a Brit singing together like they all were scouts or childhood friends.