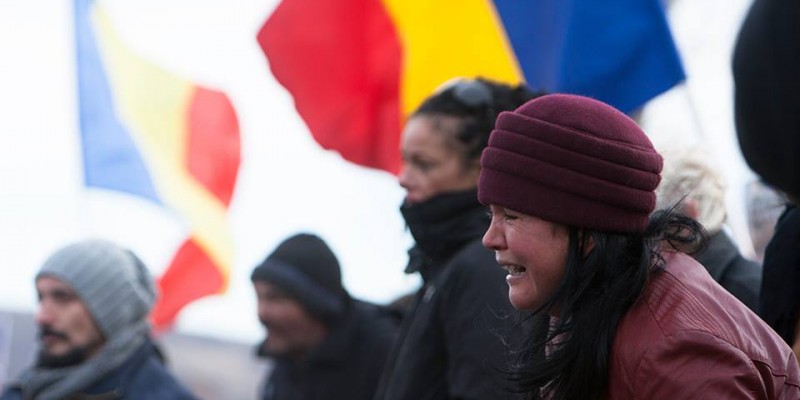 The village of Pungeşti in Romania has been the site of peaceful protests for more than two months. Villagers, mostly elderly farmers, have set up camp next to the fields where the American multinational energy corporation Chevron wants to drill for shale gas using a harmful method called hydraulic fracturing (known as fracking).

As the campaign intensified last week, people from all over the country came to Pungeşti to show their support for the villagers. Chevron halted exploration works for shale gas in Pungeşti for the second time in two months on Saturday. But they are back in force following the closure of the resistance camp by the police. However, so are the brave protesters.

Anti-fracking protesters have experienced a number of civil and human rights violations in Pungeşti - and many are complaining of police brutality. The Guardian reported last Monday that the Romanian gendarmerie (paramilitary police force) moved in to secure the way for Chevron's trucks. In a scene that resembled a military operation, they occupied the village, blocking all access points with riot police vans and preventing anyone from leaving or entering for over 24 hours – even journalists. Several villagers were detained and fined for the criminal offence of blocking a public road. Villagers say that anyone leaving their homes was stopped for questioning.

Antoine Simon and David Heller from Friends of the Earth Europe, travelled to the village of Pungeşti last weekend to observe and document the village's resistance to shale gas. 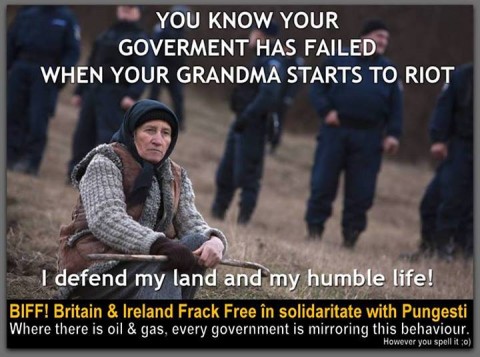 According to reports from activists at the scene at least one person from Pungeşti was hurt badly. Activists also complained that the police raided a camp on private property, across from the Chevron drilling site for which protesters had permission to use. Police have reportedly switched off public lightening in the village, as a method of intimidation, and villagers are hiding in their homes, out of fear that the riot police will show up at their door.

Neither Romanian nor European institutions have reacted so far to the violation of basic civil rights to a peaceful protest. The European Union is silent, with it's institutions dealing with human rights and civil liberties keeping in the distance.

An activist from Pungeşti said: 'Human Rights and all the founding principles of the EU were demolished during the last days. Pungeşti is the most painful spot, but it is just the beginning. They (Chevron) move on very quickly and have behind them a overstaffed Riot Police body able and willing to suppress all type of opposition, of all kind. We are right now in dire need of international help, as our cry for help stays unheard so far!''.

This village's protest against an unconventional and dirty fossil fuel is only one part of a bigger struggle. Thousands of people have rallied across Romania in recent months to protest against government support for shale gas exploration and plans to set up Europe's largest open cast gold mine in a small town called Rosia Montana. The same intimidation and violence towards protesters in Pungeşti is happening in other cities in Romania, especially in the capital Bucharest, with many people getting hurt. National mainstream media is being silent.

The fight is far from over. We need to show international solidarity and put pressure on institutions to do their job and protect the people from civil and human rights violations. They need to put the interests of people and the environment before short-term profit. Young Friends of the Earth Europe stands in solidarity with Pungeşti and with the people of Romania.