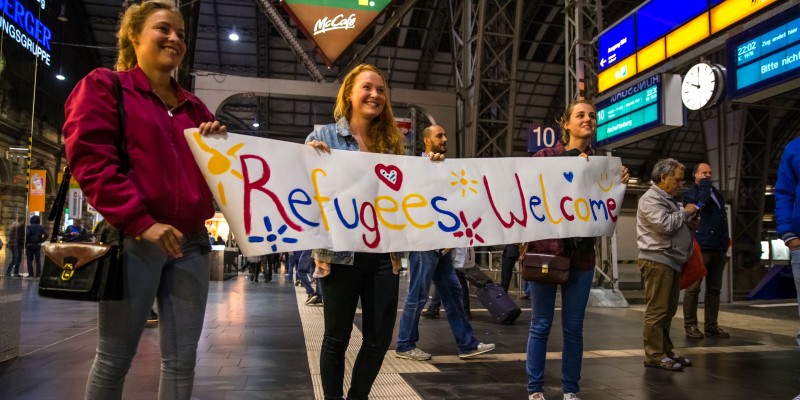 YFoEE calls for solidarity with refugees

Many people from the Middle East and Africa have lost their homes and loved ones, and are being forced to come to Europe to seek refuge. The Young Friends of the Earth Europe steering group has been discussing ways in which we can show our solidarity and support. We have gathered together some information and suggested a number of ways you can get more involved below. Please show your support in any way you are able to.

On September 12th, tens of thousands of Europeans joined marches to stand in solidarity with those who have been displaced into Europe. Young Friends of the Earth Europe groups in Sweden, Germany, Croatia and Brussels joined...

... but this is just the beginning. If you or your YFoE group wants to help and stand in solidarity with refugees, we encourage the following:

Here is also a very useful guide on how to practice real solidarity with the refugees.

If your Young Friends of the Earth group has supported a refugee action, helped out at a camp, or has any other experiences to share, tell us about it by emailing us the photos so we can share it via YFoEE channels as well!

Why do we have a responsiblity to stand with refugees, what are the links to climate justice and how should we talk about the issue? Maruška Mileta from the Young Friends of the Earth Europe steering group explains all..

Why should you stand in solidarity with refugees?

Young Friends of the Earth Europe is not only working on environmental justice, but also on social justice because we acknowledge that the systems of power and oppression that are currently fueling climate change are also a root cause of inequality, injustice and discrimination of multiple forms. As a youth network and part of the Friends of the Earth International federation we fight for justice, which includes environmental, social and human rights.

It's a complex story when it comes to reasons why people are fleeing to Europe - people are running from war, political persecution, economic distress, famine, environmental degradation etc. But all these reasons have one thing in common - rich developed countries (predominantly European) have political and environmental responsibility. These responsibilities range from the arms trade to climate inaction.

We are also talking about a huge impact of climate change on the everyday lives of people from developing countries, and how devastating environmentally irresponsible politics of rich countries already are.

Refugeeism is one of the most visible manifestations of environmental and climate injustice, because many of the refugees lost their homes due to the unwillingness of rich countries to acknowledge and act according to their responsibilities. It is really necessary to show our full support in this issue, which is fundamentally important.

It is necessary to recognise historical backgrounds, so read this great article that explores the root causes of migration, and clearly sends a message that migration is not a bad thing.

The way we communicate

In communications, emphasise solidarity, and use the narrative that people and communities across the European continent (and beyond) are coming together with urgency, understanding, compassion and humanity while politicians trail behind - they must catch up.

Also it is really important to enhance awareness of people in your surroundings because in the public debate about refugeeism there are lot of myths and hoaxes. Here and here are some basic mythbusters concerning refugees.

We urge you not to use negative words like "crisis" or "wave" in the context of refugeeism. It is unfair and unethical to talk about people, who are experiencing the real suffering, as a mass who are a threat to Europe. We should use words that are positive and welcoming, and generally dignifying for human beings.

So let's join in an act of real solidarity and human compassion, let's show what we mean by fighting for environmental and social justice, while putting more pressure on rich countries to live up to their responsibilities. Let's show the strength of our network! And finally... Say it loud, say it clear, refugees are welcome here!