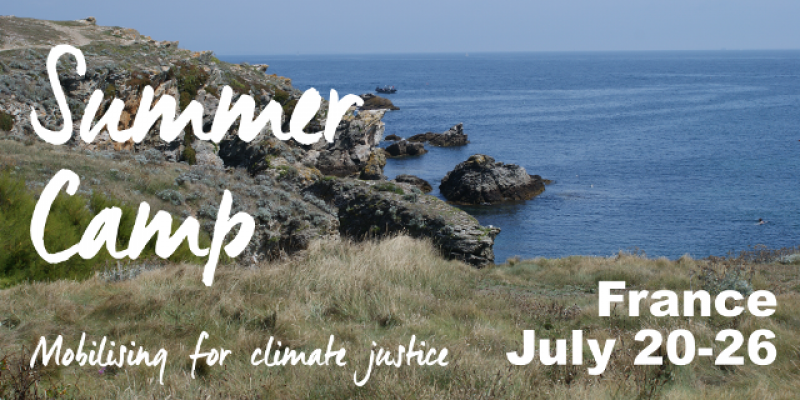 Registrations closed on the 8th of June.

From July 20th-26th, 60 young Europeans and allies from the Global South will join together for a week of skill-sharing and mobilisation in Britanny, France. We'll be joining forces in organising this exciting event with our newly formed member group Young Friends of the Earth France les Jeunes Amis de la Terre.

In December 2015, all eyes will be on Paris for the COP21, the long-awaited UN summit that should bring forth a globally binding climate deal after 20 years of negotiations. But we've learned from the Copenhagen conference: the climate crisis will not be resolved overnight. It requires building a strong movement, a long-term, justice-focused mobilization.

Resistance and alternatives are happening at the local level, and we need to continue strengthening and connecting our struggles against dirty energy, extraction, false solutions like "clean coal", fracking or nuclear energy, to change the system and put our environment and well-being first.
We know future generations will face the brunt of the catastrophic consequences of climate change, and this is why, all around the world, young people are already leading the resistance.

Britanny is a beautiful region on the Atlantic coast of France. The area is already facing climate change, in the form of rising sea levels, and water and soil pollution due to intensive industrial agriculture. But Britanny is also a place where people have historically mobilized for the environment and won important victories. The summer camp will be an opportunity to connect with people fighting on the ground, against factory farming, nuclear energy, and for renewable, community-based energy.

Join us in France to mobilise for climate justice!

This week will be about:

Programme: The programme will include sessions to learn about the YFoEE network, the campaigns and issues facing YFoE and FoE groups from at least 15 other countries, as well as skill-shares, trainings and informational sessions. We'll be also talking about some of the challenges we are facing today and which affect our work, like increasing racism and extreme nationalism, but also issues of privilege, interculturalism and inequality in the European environmental movement. But there will be much much more. Additionally we'll have some fun activities, and outdoor sports.