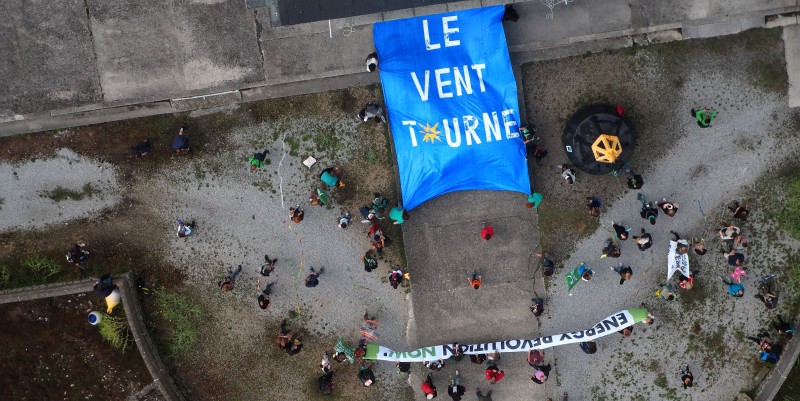 Day four of summer camp 2015 saw all 100 of us head over to the nearby Ile de Sein to march in solidarity with islanders struggling to build community-run renewables on the island and become self-sufficient. After a very choppy boat ride there and back, Josef from the Czech Republic and Roxanne from the UK shared their experiences...

Our action on the Ile de Sein

Today, on Ile de Sein, a small island in the Atlantic, a bunch of us overambitious enviros found out again, that nature is not to be messed with. We came in the morning, to try to help a local community, which is struggling valiantly against a powerful enemy – EDF, the gargantuan state-owned electricity monopoly of France. For decades, EDF has been powering this Island with great inefficiency with a massive oil generator, in a building of a picturesque lighthouse at its furthest edge.

But now, as humans have both met their greatest challenge in climate crisis but also arrived at the solution in the form of multiple beneficial renewables, some locals of this little Island decided to move into the future. No wonder they approach the climate crisis with such outstanding urgency, when they are not living even five meters above the sea. First, when they proposed to power their homes with ubiquitous energy of the sea-winds, EDF did not want to hear about it, and trough heavy political pressure, it convinced the mayor not to support the project. Why? Just to come a couple years later with a plan to build on the island – guess what – some wind turbines, so it could just keep selling electricity to people, instead allowing them to produce it themselves and for their own benefit.

So we have arrived with the maximum achievement of average activists imagination – what else, than a couple of very large banners. The plan was to unfold these banners from the lighthouse/powerplant building, as a procession of locals and other of their activist allies approached. And the plan failed, spectacularly.

When we were making one of the biggest banners, the other night, we came up with this poetic slogan of 'Le Vent Tourne' – The wind is turning, so as to show the raw, inevitable, natural power, with which, in our opinion, the energy revolution is scaling up in Europe and elsewhere. But we weren't really thinking about the wind. And when the time to show power came, the wind decided to do it himself.

Everything was ready and hours and hours of preparations were supposed to finally bear their fruits. From the late afternoon, we were waiting, anxiously preparing stuff, for the big moment. The sun was shining, the air was still, Ile de Sein was showing us its friendly face. But when the signal to climb up the roof came, it literally all of a sudden started to blow. And it blew massively. The big banner, the wind is turning? Well, the wind has turned it, and in the process, it tore off one of its ears and had us struggling to hold it in our bare hands for the rest of the action – that is why it looks so shitty in the picture. And the group on the roof, trying to 'liberate citizens energy', with that ridiculous piece of cloth? We were lucky to stay, it has almost seen us blown off and flying back to the mainland like kites – that is why you don't see that one in the picture.

Renewable energy can be very dangerous to climate activists. But it has shown us its power today better, than we could ever do. What do we needed those banners for?

We wish all the best luck to the relentless community of Ile de Sein in harnessing this great power for the benefit of them all, and not an obsolete multinational playing dirty just not to be swept away by winds of change.

When I awoke to a storm raging outside my tent this morning, getting on a ferry and then marching across a small island wasn't a particularly enticing prospect. But this was what our trip to Ile de Sein entailed. Through an intensive creative process, often during the small hours of the morning, an intricate action plan had been developed involving multiple banners, working windmills and a symbolic totem pole, all of which were made by the participants of the summer camp using whatever materials came to hand. Who needs hammers when you have a rock to nail pieces of wood together?

Developing an action plan to military precision through a process of participative democracy has its challenges. Who was supposed to be where when changed hourly. There were colour-coded teams to carry out different parts of the process, there were staged timings, there were diagrams. Most of my morning was occupied by waiting and travelling – for the bus, on the bus, for the ferry and on the ferry where most of the group felt the ill effects of a small boat going very quickly through choppy water.

Thankfully the rain held off for most of our time on the island. When we arrived we were welcomed by local residents who are battling to introduce a community owned wind project. We presented them with our pole which depicted their iconic lighthouse half submerged by the rising tide, symbolizing the amount the sea level will rise if current climate change trends continue. Dipti from Friends of the Earth International then gave a moving speech about communities across the world that are fighting dirty energy and pushing for their right to control power for themselves.

We then began our march across the island, chanting and singing our specially written song, which was sung with spirit even though many of the international participants struggled with the French. I ended up underneath a massive banner that was visible from space, or at least to any low-flying aircraft or interested birds. A comedy moment came when we had our words the wrong way round, necessitating some hasty rearranging. Then the real moment of peril came when we heard that the lighthouse was closing, which meant that our big final photograph would not be able to be taken.

We ditched our stately procession and hotfooted it to the lighthouse where we rejoined the other group, who had been dealing with their own massive banner shenanigans. United behind the slogan 'Energy Revolution Now!' we ended the day on a positive note. Despite the weather, the sea-sickness and the language barrier, we lent our support to the campaign for community energy on the island.

And here's the song we sang as we marched to the lighthouse...