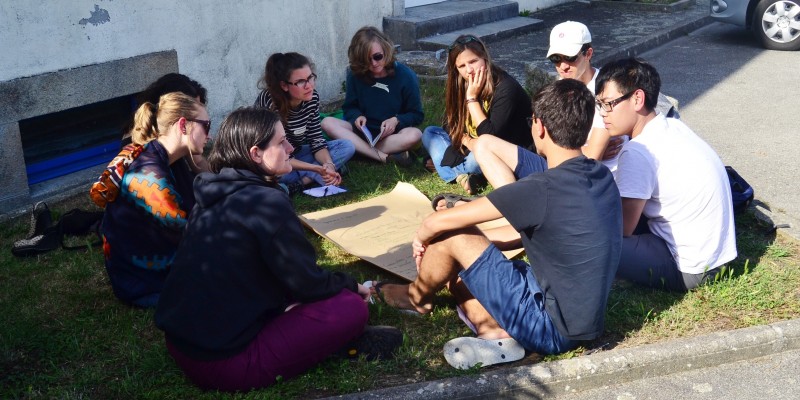 The fifth day at the summer camp was dedicated to many skill sharing sessions, discussions and creating concrete plans towards COP21 in December in Paris. Sadly,we also had to say goodbye to the first participants to leave, as our summer camp approaches its end. This time Jasmina from Macedonia and Carmen from Scotland share their insights from our final 'open space' sessions.

Carmen - Communicating for Change (and How to Do it Right)

Anyone working within a team appreciates the importance of good communications; and if they don't, they're probably doing something terribly wrong. How not to do things terribly wrong is exactly what we learned this week in the two-part communications workshop – which I'd say is quite an important skill to have.

On Tuesday, during the first part of the workshop, we explored the reasons we communicate in our campaigns and the messages we should be conveying. As environmental activists, it is our duty to shed light on dubious corporatist and government practices through a coherent and engaging discourse so as to educate, set an agenda of our own and create political debates. However, the way we frame our message is equally important and it is generally advised to create your own narrative, your own story, instead of constantly negating the discourse of the opposition. By starting on the defense line, it is easy to either reinforce the message of the political lobbyists or lose your voice in the wider debate. If you're looking for a (very trivial) example, here it is: don't think about the pink elephant. Are you thinking about it? Of course you are.

Yesterday we went a bit deeper and thought about the values we all hold and the ways we frame them in our narratives. The workshop was based on the research detailed in the Common Cause Report, which maps values on a spectrum and suggests that appealing to intrinsic values (such as appreciation of nature, equity, humanitarianism, care for the community etc) can in fact strengthen these and other related values in the mindset of the audience, therefore being more likely to have a positive and durable impact. Appealing to opposed extrinsic values will most likely only create short-term behavior change, with the possibility of collateral damage in the future. A very good example of how such communications can backfire is the following: you can probably convince most people to waste less energy in their homes and reduce their carbon footprint by emphasizing the financial benefits they would gain; however, if your audience doesn't understand the environmental reasoning behind this, there will be nothing stopping them from spending the money they saved on a previously unplanned carbon-laden holiday.

If you want to learn more, the very accessible Common Cause Handbook, as well as a Communications Toolkit and plenty of other useful resources can be downloaded from valuesandframes.org. If you don't, that's alright, but be prepared to speak to an audience searching for pink elephants on luxury holidays.

Jasmina - Before We Close

Hey, hey, I know you are sad we are finishing the summer camp and you are not be able to read our everyday stories about our great time here, but, stay tuned 'cause we have been in a very hard - working mood and lot of activities are coming up.

The focus of today's working time was the open space sessions on more than 10 topics. While I was part of only two of them, they had a great influence on my perspective and broadened my knowledge in the fields of communication and citizen's relations in different countries. It always makes me feel good when I hear that in every part of the world, people are confronted with the same issues, which shows that we are all the same, but it also makes me feel angry to hear that it happens very rarely that those issues are of high importance for the humanity and strengthening friendships relations in service of the planet Earth.

That's why we are building our movement and work on raising people's awareness on the crucial things for keeping the Earth a nice place for living. What helps us in being more convincing and influential is the awareness we can raise, in terms of how a person's values are connected with the actions she/he takes, decisions she/he makes and aims she/he is chasing. For that I would recommend you visit the www.pirc.info website, and read more on Schalom Schwartz's researche about values and communicating for social change.

See you at our next gathering to continue making change together.

Common Cause: the case for working with values and frames in environmental communications