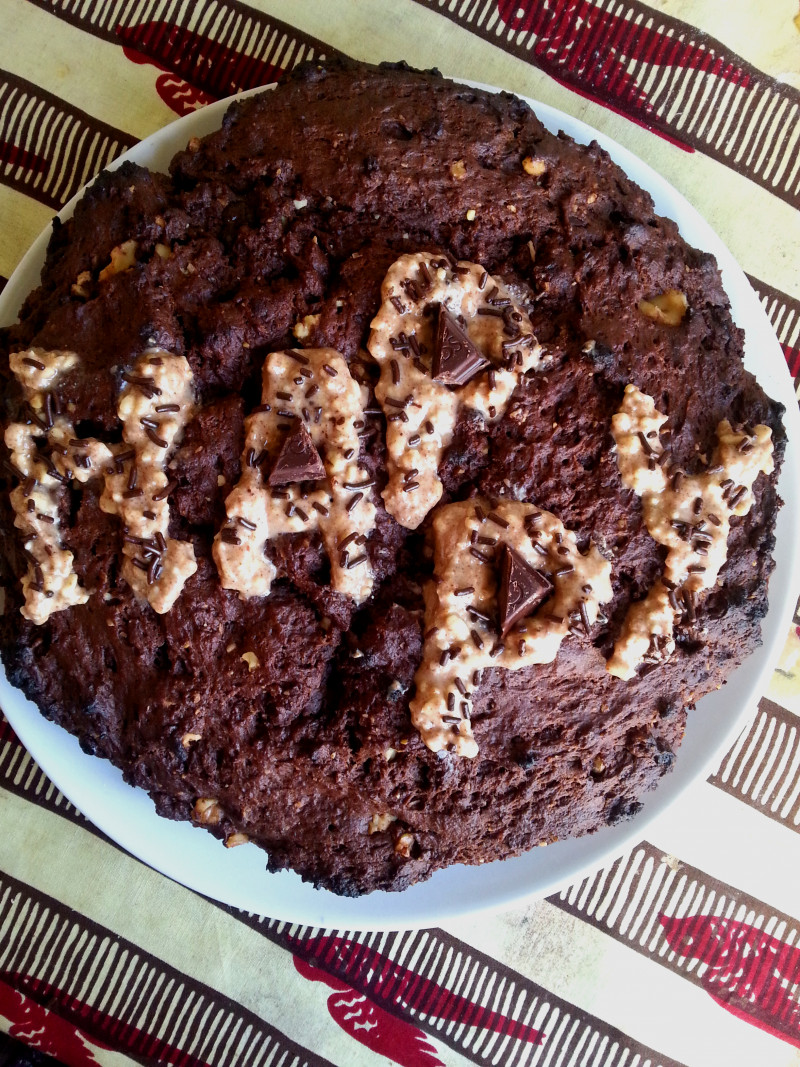 Cake with the word HAPPY written in icing. Photo: Ingrid

Ingrid explains what food sovereignty means to her and how the volunteers on Caerhys organic farm have embodied sharing and collaboration in their lives.

Hi again! Last week, Lena told you all about being a newcomer at the farm.

This week, it is my turn again to write about issues we tackle during our agri-activism placement.

Chatting with Lena about what we want to stand for, we said we want to focus on positive initiatives rather than being against various issues. We want to promote a solution for getting rid of the problems.

That is why focusing on food sovereignty instead of world hunger feels like a good idea for us.

Food sovereignty is one of the main topic of our Agri-Activism placement. As, with Gerald, we are focusing mainly on glyphosate for now – and although it can be linked to food sovereignty issues – we are actually not working directly on this topic.

And yet we are, informally. Food sovereignty, as I understand it, is a lot about replacing competition with cooperation and solidarity. So today I am going to write about sharing and how it became an imperative for us – volunteers – to do so while living together on the farm.

1. No Money No Honey

Indeed, we do not have a lot of those in our daily life.

As volunteers on the farm we have the privilege of living here for free and eating as many vegetables as we can harvest. We also get a small allowance to buy other types of food (although organic vegetables are a great source of nutrients, we need to combine them to other ingredients to get a healthy diet).

For the last month, we were many - between Agri-Activists and the WOOFers - with very few resources. We could either stick to our usual individulism or work as a team. Thanks to two WOOFers' initiative - Maarja and Olga (thanks!) - we decided to put our money in a common jar to buy groceries for everyone. We shared meals and tasks associted with them (cooking, cleaning, etc...).

We discovered that sharing is nice, but not easy. Everyone has to put aside their little routines or alter them enough in order to fit others. For some of us, it took some getting used to. But we managed for a while and I found it quite thrilling. It was a bit of organisation and A LOT of discussions.

Everyone has different tastes, requirements, habits, cultures, beliefs and ethics when it comes to food and we needed to make sure that the meals we prepare were suitable for everyone. For example, as a vegan, I was a bit anxious that I would have to buy and cook my own food, seperated from the others. But I was happily surprised that all of the cooking we did was vegan and, if there were some occasional animal products on the table, they were on the side for people to add them to their plate if they wanted to.

Our improvised food system worked on empathy and solidarity. It placed food at the center of our little democratic community for a while and made me realise just how much food is deeply connected to politics, social and environmental issues even on a tiny scale such as ours.

Since we all came from different backgrounds, we did have very different views when it came to food and, although we managed to create a lot of tasty compromises, we still debated a lot... While eating.... Which is healthy, I think.

Here is a little satire of the type of discussion we would often have between us... Please bare with this moment of fantasy.

"Agri-activism 2018 and South Wales vegetables present... The completely imaginary but not so far from truth new single feature"  "THE AVOCADEBATE"  *An immersion into Caerhys volunteers' very own food heated (and re-heated) discussions*

5. Cook as you are! Although some might find it sterile, I think that it is important that food is debated.  Food is source of life and health (or of disease, depending on your choices and/or opportunities).  You may think that the food we ate tasted of compromise. It did not. People came with their cultures, habits and tastes, and adapted to what and who was around to create meals that were – in a wide majority of times – very tasty.  We discovered each others' dishes just as we discovered each others point of views; almost as if cooking for each other was a discussion in itself. This dynamic was particularly visible when we baked for a festival taking place in a farm near ours. We had no specific instructions besides having to bring cakes. We organised ourselves and made one or two cakes each, without too much consulting with each other (for once). We arrived quite easily to a result where 90% of cakes were Vegan, 50% were gluten-free; and tastes, shapes, textures were varied, so almost anyone could find something for themselves. I think this spontenoues outcome shows well the "inclusive cooking" dynamic of our kitchen.

6. Completely Wasted? Having access to fewer choices and resources made us more aware of our consumption.

When we eventually went to buy some food, we asked ourselves for pretty much each item "Do we really need it?", "Can we get it another way?", "How is it produced?", "Did we pick something for everyone?".

It created new habits and shone a different light on our old ones. Especially since we ourselves are growing food. I guess being a part of the food production chain makes you think a lot more about other producers and about which ones you want to support.

It forced us to think outside the box and to ask shops for "out of date" products or to directly go shopping in their garbage. Who cares about the smell when you can get free food? For me, it sure feels like a treasure hunt every time. On a Sunday, we often get enough food from the trash to keep us going for almost a week... On one hand it is nice and cheap for us, on the other it makes us quite sad and aware about the costs of this food waste-based system on our planet and its inhabitants.

7. Want my share?  I am using past tense because Maarja and Olga – who initiated this cooperaive dynamic between us – have now left the farm, alongside other people.   Being just a few of us remaining, we are going back to a more individualistic system with some sparkles of cooperation once in a while.   I guess it is normal that this kind of system changes with the people who take part in it. But I am quite sure that, with more volunteers coming soon, we will build a new cooperation around food issues.   In the meantime, I want to keep sharing, and I want to share stuff with you (who hopefully bared with my writing until the end of this post).   Here is a "recipe" for growing potatoes vertically. It might prove useful to some of you or to someone you know! It is particulalrly good if you want to save space in a garden or just enjoy growing vegetables in an unconventional way. Please bare in mind that we are ourselves experimenting with this method by applying a mixture of what we know with what we guessed! It might not be 100% perfection and if you have some better way to do it, please feel free to share as well ;)   Anyway, here it is: