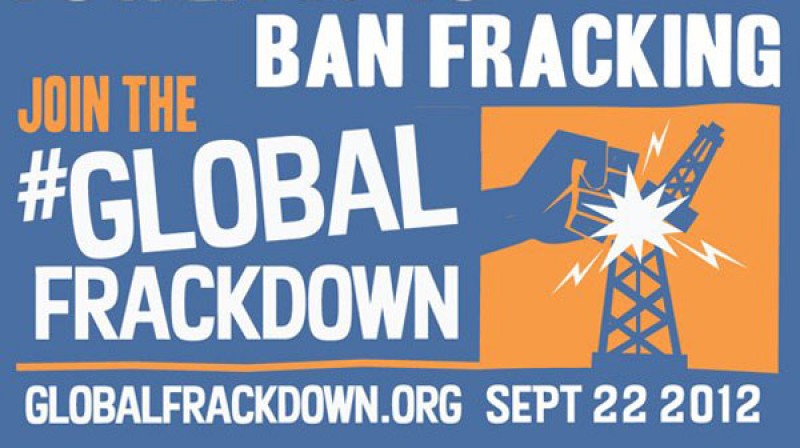 Reclaim Power: Global Month of Action on Energy has kicked off and Young Friends of the Earth Europe is joining the events happening all around the world for the next 30 days tackling the issues of fracking, coal power, the fossil fuel industry, and supporting community renewables.

As you already know, we have joined forces with our friends at Psh Europe and prepared a European website for Reclaim Power Month.

Each week will have a different focus and this weeks focus is fracking (11-19 October) -  one of the the dirtiest and most extreme forms of fossil fuel extraction - with the central event being Global Frackdown on October 19th. A project of Food & Water Watch, the second annual Global Frackdown will mobilise thousands of people to call for an international ban on fracking. There are already almost 100 actions registered worldwide and more coming in every day.

Young Friends of the Earth Europe is a partner in Global Frackdown and we demand a frack free Europe. It's time to end our dependency on fossil fuels!

To get inspired, check out the European action toolkit for the Global Month of Action of which Global Frackdown is the first stage. There are many different ways to join and you can find other resources which you could use here.

Social Media Storm - October 17: Save the date - October 17! To make the event as visible as possible, let's post on facebook and tweet about #globalfrackdown on October 17.

Good news from around Europe

Last week, France's highest legal body, the Constitutional Council, has upheld the nation's ban on fracking! The ban was passed by the parliament in 2011 and the high court approved it on Friday. If you want to know more, read this news story.

Also last week the US energy company Chevron decided not to go forward with plans for shale gas exploration in Lithuania.

On top of all, the European Union voted on Wednesday in favor of mandatory Environmental Impact Assessment for all shale gas drilling, something that was opposed by the fossil fuels industry.

According to Global Frackdown, the anti-fracking movement has grown exponentially since the event last year, which included 200 community actions in more than 20 countries. Accomplishments include (source: ecowatch.com):

Let's make the movement even bigger this year!