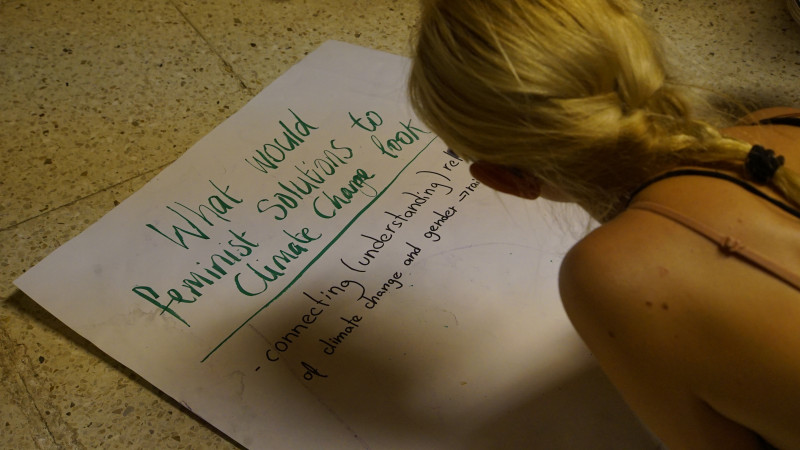 Women on the Front Lines of Climate Change

Women are often the most impacted by climate change, and they are also the ones leading the struggle towards a sustainable future!

If climate change has taught us anything, it's that we don't live in homogenous societies.

When climate-induced catastrophes strike, all of the social and systemic injustices that persist in our societies are revealed. In one of our previous mythbusters, we've already debunked the myth of climate change being only an environmental issue and exposed how it fuels an entire range of inequalities.

An understanding of how climate change affected us disproportionately, is the basis of challenging its causes and coming up with fair solutions.

We have heard before that women are affected disproportionally by climate change, we know it, the UNFCCC finally figured it out, some might still not be willing to accept it, but let's examine this issue more in depth to see how it reveals a prevailing gender gap in our societies.

Things we should keep in mind

1) In this piece we decided to focus on women. However, we should be aware that there are more than two genders. Examining how climate change and discrimination affects other genders and non-binary people is also very needed.

2) When speaking about women, we do not refer to the experience of Women in general. It's important to remember that gender is linked with other social categories (like race, religion, ethnicity etc.) and especially class and socioeconomic status. Indeed, we'll see that the majority of cases we'll mention will involve women and girls living in poorer areas around the world.

The majority of world's poor are, in fact, women.

So, we should keep in mind that gender inequality issues are also connected to the overall problem of the division of wealth. This also brings out the question of the unjust division between the Global North and the Global South, where the former is historically responsible for causing climate change, while the latter suffers the worst consequences of it.

3) The third thing we have to remember is that, when we say women are more vulnerable to climate change effects, we by no means refer to any biological difference between women and men. They are not "naturally" more vulnerable, we refer to prevailing sexist social and institutional structures, particularly visible in places where patriarchy is still heavily embedded in the social norms and reflected in gender roles and ways of living.

Having this in mind, let's see how and why climate change affects women disproportionately. To be able to imagine how we need to immerse ourselves in the daily lives of many women around the globe. So, let's try to do just that.

In many countries, sexist social structures produce gender roles and certain expectations for women that put them in greater risk when disasters hits. In general, women tend to have less opportunity to access education, obtain income, land, livestock or technology. These cultural and traditional norms make women more dependent and less able to respond to natural hazards.

This works on many levels: being denied education; depending on their husband or family for income;not being thought basic survival skills, like climbing or swimming, which makes them more likely to die during disasters. In some, more extreme cases, women may be prohibited to leave the house without a male or a family member present, so they die when houses collapse during disasters. Some women can't own a mobile phone which could be used to call for help. Some have to wear traditional clothing that may get in the way when running or swimming, making it harder for them to escape disasters.

The fact of the matter is, women die in greater numbers than men from natural disasters.

Workload and responsibilities during crises

It's also important to realize that woman usually take on the role of the caregivers and that this role is increased during crises. In many cases, women and girls are directly responsible for taking care of the household, children, sick and elderly. They are often in charge of securing water, food, fuel and other resources. In times of climate crisis women's workload, house chores and responsibilities increase sometimes even dramatically.

We can imagine how: Climate change often leads to increase migration of men, while women stay behind to look after the family. Girls are often the first to be pulled out of school to help the family and save some money. Furthermore, climate change's unpredictable weather patterns have a huge impact on agriculture and food production. Because of their social status and lesser access to higher education, women are more likely to be farmers in the developing countries, so they depend on the land for income and are directly affected by droughts or floods.

Heatwaves and droughts force women to travel huge distances to obtain water. Apart from increasing this particular burden, this increases the possibility of women and girls being assaulted on the way.

During floods, when humidity is high, harvesting water and food also put them in more danger of mosquito-borne diseases like Malaria or Dengue. In short, situations of climate crises augment the social burdens placed on women and girls, making them less able to focus on education or employability.

Gender based violence and risks

Climate disasters, like any type of natural disasters, disrupt daily routines and the existing social order.

In these times women and children are more vulnerable to abuse, rape, trafficking and child marriage. Furthermore, disease transmission, like STDs, HIV, malaria and dengue fever is higher, especially for women. This is usually due to malnourishment that often accompanies climate crisis and other factors like reduced access to contraceptives.

On the other hand, when they do migrate or are forced to migrate, women have it harder than men. They are exposed to higher risks of gender-based violence, sexual violence and trafficking, as shown in this infographic.

Apart from the uneven access to education and mobility, as mentioned above, an underlying general issue women face today all around the world is an unequal access to decision-making processes.

Women are usually underrepresented in local politics. While women in rural areas statistically suffer greater losses during and after environmental disasters, they are usually not represented in climate change decision-making or adaptative and mitigative processes.

Gender inequalities are also visible at higher levels of politics, when negotiating over climate change. Even though the situation is being addressed and slowly improving, from the scientific field to policy-making woman are still underrepresented in the international climate debate. All of this prevents women from giving their needed contribution to planning, policy-making and implementation.

On the other hand!

Women can, and continuously do, play a vital role in effectively responding to climate change!

Women tend to have specific, unique knowledge and skill that are needed in combating climate change and adapting to it. This knowledge is usually passed down from their mothers and grandmothers and involves a range of sustainable practices: from collecting and managing resources, resilient agriculture, water source protection and energy conservation and production.

Studies have shown that when in control of the resources women are more likely to use it for the good of the community, for health and economic stability. Also, because of their involvement in every-day practices women have a smaller carbon footprint than men and tend to prefer safer climate technologies. Because of their involvement in the family life and the life of the community women's participation in local and international political level is absolutely needed to ensure the outcomes of the policies match the community's actual needs.

In summary, it's imperative that we listen to what women across the world have to say. In all the discussions about climate and communities there needs to be a space for women to articulate their point of view, propose solutions and lead.

Although many big international deals are still gender-blind, progress is being made at all fronts. A gender component is starting to be considered in adaptation measures. Women and groups around the world are coming together to address the gender gap, empower other women and demand female participation at all levels of the climate debate.

Let's remember: climate change is not a single–issue struggle, we need to address all the power relations it reflects accordingly. When talking about gender, the need for empowering women and achieving gender equality is indisputable. Adapting to climate change and creating sustainable and just futures will not be possible without it.