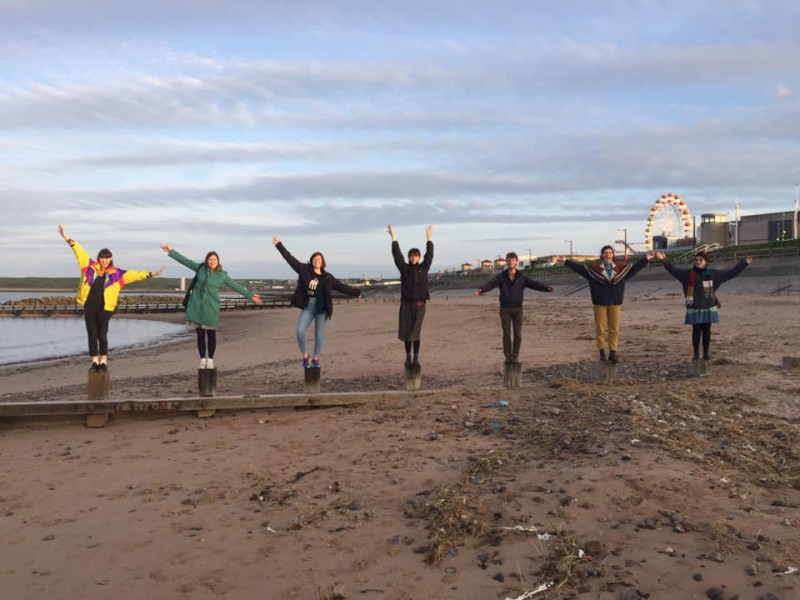 Young Friends of the Earth Scotland and Natur og Ungdom (Nature and Youth)/ Young Friends of the Earth Norway came together for a three-day training in Aberdeen, Scotland on the theme of 'Just Transition' as part of YFoEE's larger series of trainings on working with affected communities which took place across Europe. Specifically, we were looking at how to transition away from oil while still protecting workers' rights and we looked at the similarities and differences between our two countries' experiences. This training weekend also included young people from Aberdeen themselves, providing a crucial perspective on how this transition could best be done in a way that protects the local community.

The weekend features talks and workshops on a number of different themes including the history of anti-oil activism, an insider account of the oil industry, political parties, oil and nationalism and the secondary impacts of the oil industry. We also had a talk from two members of UNISON, Scotland's largest trade union, about how they fight for the rights of workers and about their call for a Just Transition. The training had 'skillshare' workshops from some of our own members too. This included discussing 'post-work' ideas, a climate justice workshop, tools for community organising workshop and also an interesting talk about how Young Friends of the Earth Norway has built coalitions with affected communities to build a campaign demanding green jobs.

What we have taken away from the training is the need to put the workers and the community at the heart of any asks for a Just Transition. Any campaign we do as Young Friends of the Earth Scotland needs to be community-led and we are looking forward to hopefully working with the young members of trade unions in Scotland to support their demands for a Just Transition that protects both jobs and the environment. Any Just Transition campaign we do must fundamentally recognise that neoliberal capitalism is the cause of this environmental crisis. This requires campaigning for a larger restructuring of the economy to promote wellbeing instead of economic growth, including the guarantee of secure work that is genuinely sustainable. To do this, the state will need to invest in creating new green jobs to ensure that the renewable energy sector is not run for profit, but for the benefit of the people and the planet.

Finally, a Just Transition within Scotland must take into account that the effects of climate change are most acutely felt by those in the Global South and by those who are the poorest and least able to be mobile across the world. Scotland must own up to is responsibility for creating and profiteering off of a huge amount of carbon emissions while also being the birthplace for many of the founders of the industrial revolution as well as the 'father of capitalism', Adam Smith. We must therefore not fall into a trap of using a nationalistic argument for a Just Transition, such as arguing that Scotland should become a world leader in renewable energy, as that does not take into account the damage our country has caused through our historical emissions and colonial legacy. Instead, we must campaign for the rights of migrants, refugees and workers around the world through working towards a global Green New Deal in addition to securing a Just Transition within Scotland.