OMV out! No Austrian oil drilling in the Adriatic

Together with coalition partners from the SOS Adriatic campaign, they called on OMV not to sign an agreement which would open up the Adriatic to oil exploration.

OMV, as part of a consortium with the American oil company Marathon Oil, received a preliminary permit for the biggest number of exploration fields in the Adriatic. Overall, these include seven fields in the central and southern Adriatic, some of which are in the immediate vicinity of the Kornati National Park, Nature Park Lastovo Islands, Mljet National Park and Dubrovnik. The Croatian government intends to give this concession to OMV. 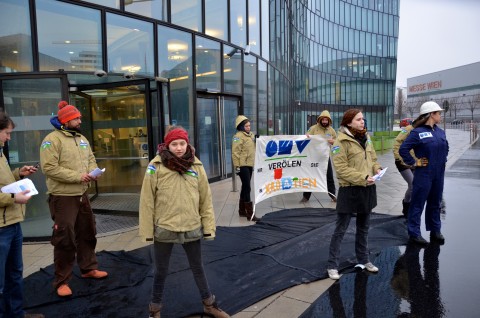 Last week, the SOS Adriatic coalition sent letters to all potential concessionaires, informing them of serious flaws in the process, legal irregularities, vocal opposition to the project from local communities, and the fact that local population was not consulted. The aim of the action in Vienna was to inform the Austrian public, the media, the company OMV about many shortcomings of this project and to once again invite OMV to withdraw from signing this contract that will harm the Adriatic.

Johannes Wahlmüller, Energy Specialist with Global 2000 said: "OMV is gambling with the sensitive ecosystem of the Adriatic Sea. The project will have a devastating impact on the lives of many people that have for centuries relied directly on tourism and small fishing. In addition, with this project OMV extends the dependence on fossil fuels, a technology of the twentieth century, while alternatives such as renewable energy and energy efficiency have long been readily available. Therefore, Global 2000 calls on OMV to withdraw from its plans related to the exploitation of oil in the Adriatic Sea, a European natural treasure, in order to protect the beautiful scenery for all of us and for future generations."

The SOS Adriatic campaign aims to preserve the whole of Adriatic from oil pollution, not only stopping the planned activities in Croatia, but also the rapid finalization of the existing production on the Italian side.

The campaign is led by NGOs from the Croatian environmental network Green Forum: Zelena Ackija / Friends of the Earth Croatia (Zagreb), Sunce (Split), Green Istria (Pula), Žmergo (Opatija) and BIOM (Zagreb) in cooperation with Greenpeace and WWF Adria. With this action, the coalition continues a series of public events intended to include the general public and to raise awareness about the disastrous consequences that oil exploitation in Adriatic could have for tourism, fisheries and the marine ecosystem as a whole.