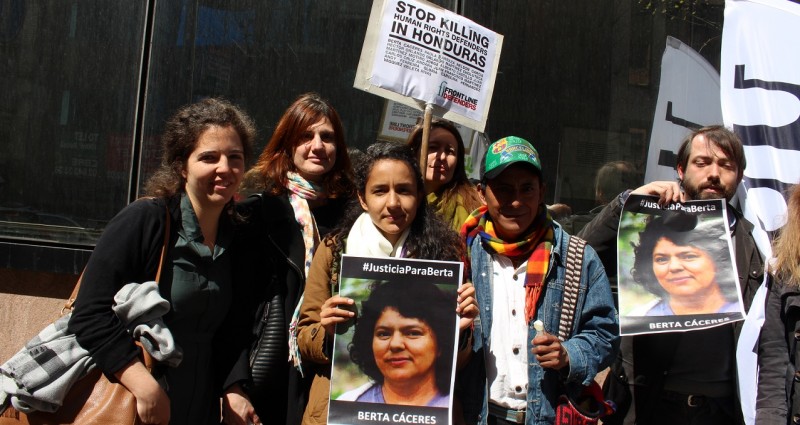 Activists from the Council of Popular and Indigenous Organizations of Honduras (COPINH) – the indigenous group that was led by murdered environmental activist Berta Caceres – are calling for the suspension of European aid to Honduras until human rights in the country are respected.

The COPINH activists - who include Berta’s daughter Bertha Zúñiga Caceres and are supported by Friends of the Earth Europe – have been in Brussels for the past two days to speak to MEPs, representatives from the European Commission, civil society organisations and the public about the repression and impunity in their country. They also took part in a protest at the Honduran embassy in Brussels.

Following the murder of Berta Caceres, and the widespread persecution and repression against indigenous, environmental and human rights organisations in Honduras, the COPINH delegation are calling on the EU to review the human rights clauses in its aid to Honduras, and take action to suspend security aid to the country.

They are also demanding that the Honduran government allows an independent investigation, led by a commission of experts from the Inter-American Human Rights Commission, to take place into Berta’s murder. This must take into account the death threats Berta received for her defence of Lenca territory and rivers and include the investigation of possible links with the Agua Zarca hydroelectric project and companies involved in it.

During the protest outside the Honduran embassy, the COPINH members joined a large gathering of Belgian and international civil society and grassroots organisations to condemn Berta's senseless murder and stand in solidarity with human rights defenders under threat across the world.

Speaking at the protest, Berta’s daughter, Bertha Zúñiga Caceres, said: “Those people who murdered my mother made a big mistake. My mother did not die, she was multiplied. We cannot be stopped.”

After years of violence and intimidation in relation to the Agua Zarca project, the COPINH members are also demanding that international companies and financiers, specifically FMO, Finnfund, CABEI and Voith Hydro (Siemens/Voith), immediately withdraw all support and funding from the Agua Zarca project, and end any ongoing or prospective involvement in any other project impacting the indigenous Lenca in Honduras.

They are calling on all governments and the international community to monitor, investigate and punish these crimes, and for Honduras to be held accountable for abuses in the upcoming review of its human rights record at the UN Human Rights Council.

Bertha Zúñiga Caceres said: “My mother repeatedly informed FMO of the increase in violence caused by this project. She told them several times that the project was not supported by the Lenca people. But FMO chose to ignore it and supported the project regardless of her warnings”.

Along with their visit to Brussels, the COPINH delegation will also visit the Netherlands, Finland, Germany and Spain in the coming weeks, meeting with MPs, policy makers and financiers, and raising awareness of the situation in Honduras.