As Europe’s prime ministers meet tomorrow in Sibiu, Romania, to shape the future of Europe, the EU’s next five-year priorities and long-term climate goals, Friends of the Earth Europe urges them to grasp the nettle of transformative change.

Jagoda Munić, director of Friends of the Earth Europe said:
“With young people on the streets worried their future is being robbed, climate and ecological breakdown heading off the dial, and three in four Europeans believing our political systems are broken – it's crucial that Europe’s leaders usher in bold action to address the environmental urgency and people’s concerns. Enough with business as usual rhetoric – European leaders must embrace transformational change towards the fairer, greener and more caring Europe we need.” 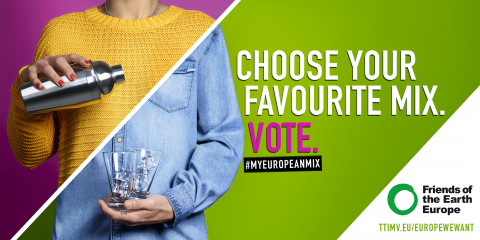 The Sibiu Summit is set to be the culmination of discussions around the Future of Europe, and is presented as a reason to celebrate a more united, stronger and more democratic EU.

Sustainability watered down at Sibiu?

However, a Draft Summit Declaration does not mention a ‘sustainable Europe’, nor biodiversity collapse, and relegates climate change to an afterthought behind ‘new trading opportunities’. This represents a reprehensible weakening from earlier interventions in the ‘Future of Europe’ debate, in which sustainability was more explicit.

The downgrading of sustainability is surprising, given that it had been identified in European citizen consultations as one of the top priorities and tomorrow’s summit is billed as renewing commitment on the ‘issues that really matter to people’.

We need a sustainable Europe

Friends of the Earth Europe demands a future for Europe in which sustainability sits firmly at the heart of the European project – with action on a full and just transition off fossil fuels, a drastic reform of trade policies without privileges for investors (ISDS), and maximum protection for our nature. Civil society groups also call on heads of Member States to propose candidates for the new Commission that have a strong track record on sustainability issues.

On climate action, EU leaders are still divided on whether to embrace a target of cutting emissions to zero by 2050. But even if agreed, this timeline is too slow for Europe to do its fair share to keep global warming below 1.5 degrees.

Jagoda Munić said:
“Climate breakdown is happening now, and as a rich continent responsible for causing carbon pollution, the EU's suggestion to wait until 2050 to go ‘net zero’ is simply too late for Europe to stop burning fossil fuels. These long-term promises are only meaningful if they’re matched by early transformational action now to halt investments in fossil fuels, institute massive energy savings, move to 100% renewable energy by 2030, and start implementing climate solutions in other sectors in a socially fair way.”