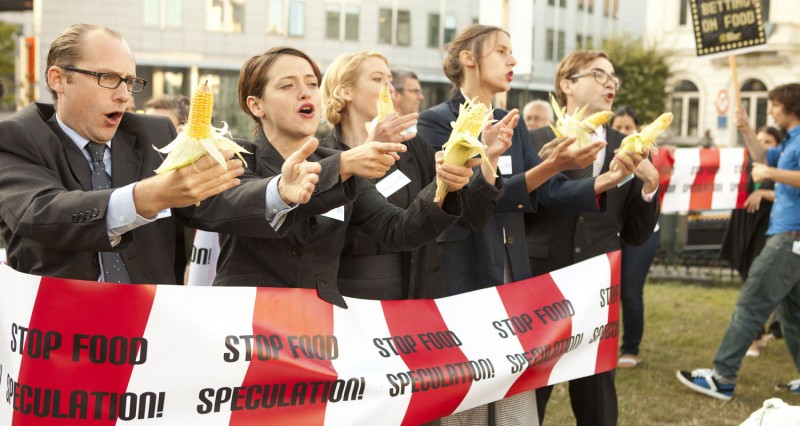 Actors dressed as bankers were restrained with hazard tape today in a stunt calling on EU negotiators to strengthen rules intended to curb the destructive practice of food speculation.

The protest by Friends of the Earth Europe, alongside development organisations FairFin, Oxfam, SOS Faim, World Development Movement and CNCD, comes at the start of crucial negotiations on proposed EU financial reforms known as MiFID (Markets in Financial Instruments Directive).

The organisations are calling on negotiators to close loopholes in the negotiating texts to prevent banks and financial investors from driving-up food prices through food speculation.

Anne van Schaik, accountable finance campaigner at Friends of the Earth Europe, said: "We believe that the hunger of people must come before the hunger of financial institutions. Europe needs robust financial regulation to prevent banks and financial investors from profiting by taking food from the table."

A piece of hazard tape representing the concerns of over 35,000 citizens, was handed-over to Markus Ferber, the German MEP who leads the discussion on MiFID reforms.

Markus Ferber MEP, said: "We are trying to close all loopholes, there's no need for speculation to take place." 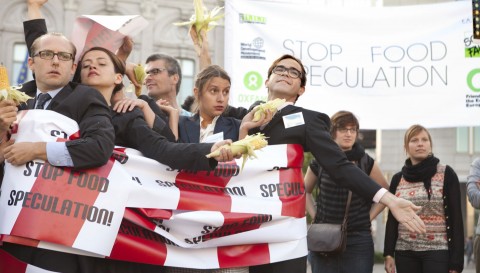 Food speculation occurs when speculators gamble on the price of food. This creates fluctuations in food prices and price spikes which dramatically increase the price of basic foods. This has drastic impacts on the world's most impoverished people.

Friends of the Earth Europe and coalition partners Fairfin, Oxfam, World Development Movement, SOS Faim and CNCD want the EU to introduce strict regulations on the market to halt this excessive speculation. These include establishing position limits at EU level, which restrict the number of contracts that can be held by each speculator, and would help to secure low and stable prices in the future. In addition, strong requirements on transparency and reporting are needed to ensure meaningful monitoring.