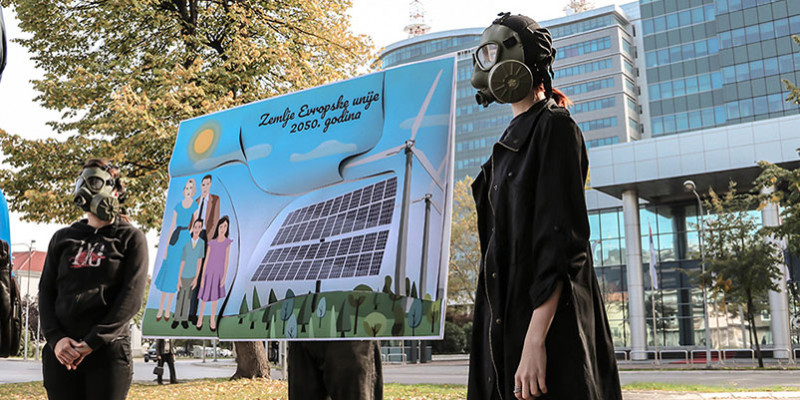 On the occasion of the Friends of the Earth International days of action for climate justice, activists from Center for the Environment/Friends of the Earth Bosnia & Herzegovina gathered in front of the Republika Srpska government building to show clearly what the country can expect over the next 30 years if the government continues to pursue a policy of investing in fossil fuels.

Numerous studies show that investment in enormously costly coal power plants, which are overwhelming for the government's budget, are causing increasing medical costs due to ever-more respiratory problems from the emissions which come from burning coal. Meanwhile the impact on the environment and climate is difficult to underestimate.

While the main arguments of pro-coal politicians and investors are new employment, the export of electricity and the supposed economic stability of the state, the impacts are mostly felt by citizens and the natural world. If we look at the actions of our minsters, we can clearly see their failure to take into account destruction of nature, and the devastation of areas that communities live in and depend upon.

Duška Kudra, coordinator of the energy and climate change program at from Center for the Environment/Friends of the Earth Bosnia & Herzegovina, said "Bosnia and Herzegovina, by joining the European Energy Community, wanted to build a reputation as a serious country with high levels of development, but on the other hand does not want to fulfill these same obligation and goals? We think that this is a very hypocritical attitude toward the people of this country, who suffer from the pollution and continuous collapse of the quality of life here."

The impacts of coal plants are felt keenly by citizens in Bosnia and Herzegovina, who are kept in the dark about the process for siting new ones.

Surveys conducted at the city of Gacko, situated near to a coal power plant, show that 84% of citizens claim they are breathing in pollution caused by the Gacko power plant. Meanwhile, agreements and plans for the construction of new coal power plants nearby are being made without the citizens of Gacko having the opportunity to express their opinion.

New thermal power plants planned in Gacko, Tuzla, Banovići, Ugljevik, Tomislavgrad and Kamengrad, and the re-announcement that Shell is interested in exploring oil in the Federation of Bosnia and Herzegovina shows the government's unwillingness to turn towards the energy transition towards renewables its citizens and environment need, threatening chances of a cleaner future for Bosnia and Herzegovina.