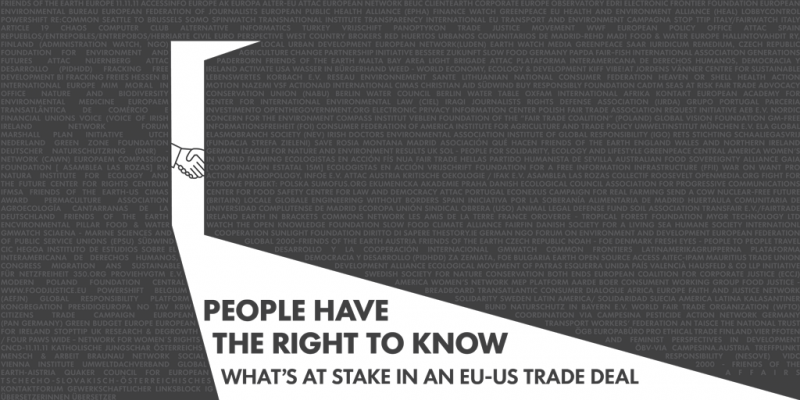 EU-US trade talks – people have the right to know

Over 250 civil society organisations and networks have today called on the European Commission to open up the EU-US trade negotiations for public scrutiny. The fifth round of negotiations on a Transatlantic Trade and Investment Partnership (TTIP) begins today in Arlington, Virginia amid growing frustration at the secrecy of the process.

In a letter to European Trade Commissioner Karel De Gucht, the organisations ask for the publication of the negotiating mandate, all documents submitted by the European Union during the negotiations, and the negotiating texts themselves. Citizens have the right to know what is being put on the table, and how this is being negotiated, say the groups.

Magda Stoczkiewicz, director for Friends of the Earth Europe said: "These negotiations have the potential to impact upon many aspects of life for citizens here and in the US, from food or chemical safety to the environment. The European Commission cannot continue to remain deaf to civil society calls for transparency – people have the right to know what's at stake."

In February Friends of the Earth Europe, ClientEarth, Corporate Europe Observatory, the European Environmental Bureau and the European Federation of Journalists requested access to the negotiating mandate of the European Union, as well as text relating to the positions on issues such as regulator cooperation, the investor-state dispute settlement, the chemical sector, food safety, sustainable development and energy [1]. The European Commission denied access to all.

Under the guise of 'regulatory coherence', safeguards related to these issues will be put up for negotiation. This has raised concerns among many actors about the likely weakening of public safeguards and new institutional structures, and about allowing excessive industry influence over decision-making [3]. As it stands, Friends of the Earth Europe remains concerned the deal will trade away democracy in Europe, and safeguards that protect people and the environment.

"It's amazing that the longest living democracies in Europe and the United States cannot negotiate in public" said Erich Pica, President of Friends of the Earth United States. "Why keep these negotiations secret? Why do corporate lobbyists have privileged access to negotiators and text and not the public?"

Negotiations for a trade deal between the European Union and the United States started in July 2013. If agreed, the deal will be the biggest bilateral free trade agreement in history.

People have the right to know: letter calling for transparency