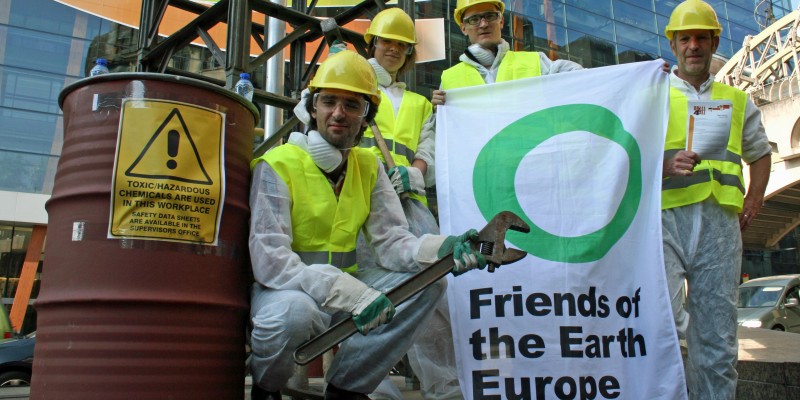 The promotion and expansion of controversial fracking [1] in Europe appears to have become the core aim of an advisory network set up by the European Commission last year. The body was supposed to assess on-going fracking projects and the safety and appropriateness in Europe of different technologies.

Antoine Simon, shale gas campaigner at Friends of the Earth Europe said: "While a 'science and technology network' on unconventional fossil fuels sounds objective, it's a complete façade. The European Commission is giving the fracking industry all the seats at the top table and crowding out citizens and groups with legitimate concerns about this dirty industry."

A look at who's who in the advisory network paints a worrying picture of the dirty energy dominance of the Commission's shale gas policy. Of members who are not employed by the European Commission:

Pascoe Sabido, researcher and campaigner at Corporate Europe Observatory said "While the Commission is crowing from the rooftops about its climate ambitions as we get closer to crucial climate talks in Paris, its cosy relationship with the fossil fuel industry ensures fracking is being ushered in through the back door. This not only smacks of hypocrisy, but it ignores the millions calling for an end to fracking and for fossil fuels to be left in the ground. But this case is not a one off. Privileged access for dirty industry is endemic among the Commission's advisory groups. Hopefully the European Ombudsman's on-going investigation should be enough of a wake-up call to fix the problem once and for all."[3]

With the fracking industry already responsible for substantial environmental damage around the world and widespread public opposition to it across Europe, it is deeply concerning that the fracking industry has such a dominant position in evaluating its own performance. Friends of the Earth Europe and Corporate Europe Observatory are calling for this new advisory network to be recognised as a front for industry lobbying and therefore scrapped.

Notes:
[1] High-volume horizontal hydraulic fracturing or 'fracking' involves using a combination of technologies for extracting unconventional fossil fuels such as shale gas, tight gas, shale oil and coal bed methane. It requires a pressurised liquid composed of water, sand, and chemicals. It has disastrous consequences for public health and the environment – such as water contamination and air pollution – and can even trigger earthquakes. A growing body of science suggests that the impact of shale gas production and consumption could have a climate impact comparable to the most polluting fossil fuels, such as coal.

[2] When this article was first published we reported that there were five chairs. This has since been corrected.

[3] The European Ombudsman reviewed the European Commission advisory group policy and found it deeply inadequate. She has, among other things, recommended legally binding rules across all advisory groups in all directorates general, which the Commission has until 30th April 2015 to respond to.