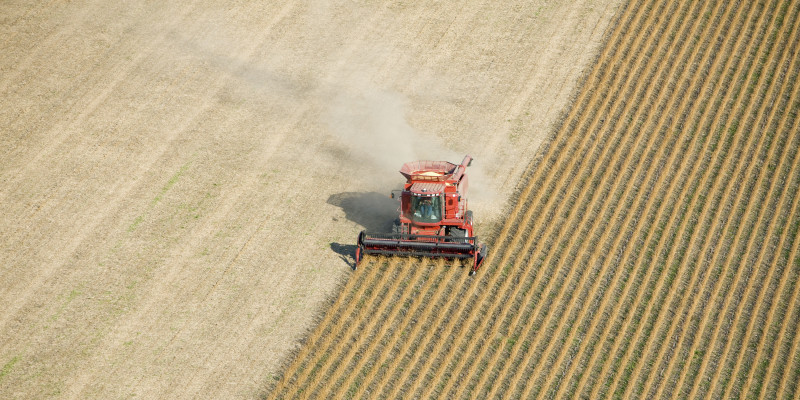 Give peas a chance: what now for the EU Protein Plan?

Every year, big factory farms in the EU rear more animals for meat than there are humans alive on Earth. More than eight billion animals is a huge number of mouths to feed – and much of the food that ends up doing this job is soy, largely imported from Latin America, and increasingly also from the USA.

The EU's dependence on imported protein crops like soy has increasingly found itself on the political agenda of late. Following two European Parliament reports on the topic initiated by Martin Hausling MEP in 2010 and another one by Jean-Paul Denanot MEP, as well as a "European Soya Declaration" signed by 14 national governments, the EU has come to the realisation that its dependence on imports, principally of soybeans, is unsustainable.

Rainforests in Latin America, and the communities and biodiversity they support, have been scarred by the expansion of large scale genetically-modified soybean production, sprayed with glyphosate. Much of this has been driven by EU imports, and more recently by increased demand from China.. The European Commission is currently producing a report on the issue, another step towards firming up a policy plan for growing more protein crops in the EU.

Sending a message to the EU

On Tuesday 9th October, Give peas a chance: How can European legumes contribute to a climate resilient farming sector and boost farmers' incomes?, an event hosted in the European Parliament by Friends of the Earth Europe and Martin Hausling, brought together interested parties to discuss what the EU's protein crop future should look like.

Juan Pereyra, an Argentinian lawyer, warned of the dire consequences of out-of-control pesticide use for industrial soybean production; the environmental and human health impacts in his home country have been devastating. Pereyra urged the EU not to fall into the same trap. His testimony highlighted the relevance of the recent political attention given to the EU's 'protein deficit'.

Silke Boger, head of the 'Arable Crops and Olive Oil' unit at the European Commission, shed some light on their upcoming report on protein crops, which follows a stakeholder survey earlier this year. The report will outline the current supply and demand situation and market drivers, before addressing the state of play in research and some potential solutions. However, it was emphasised that any measures considered would fall within existing policy frameworks, such as the Common Agricultural Policy (CAP).

Following this, Atilla Szocs, of the Romanian peasants' rights organisation Eco Ruralis, urged policymakers to think about the broader social implications of EU policy, for example issues such as farmland ownership. Incentivising the production of soybean and other commodity protein crops under the current political and market context may serve to fuel further land concentration and land grabbing, he argues. This is particularly a worry in Central and Eastern Europe where fertile soils, soybean-friendly conditions, and cheaper land and labour attract corporate agribusinesses and financial speculators . Without explicitly placing small-scale agroecological producers at the centre of policy reforms, Szocs fears that patterns of increasing corporate control over our food system will continue.

In the light of the environmental and social concerns raised, it is clear that alternative food-system models need to be developed. Henrik Maas, from the Hoffenheim Research Centre for Global Food Security and Ecosystems, explained an initiative called the TRUE project. Under the project, which involves 24 institutions from 11 countries, 'Legume Innovation Networks' are being developed with a multi-actor and holistic supply-chain approach. The aim is to develop strategies to reduce dependency on soybean and synthetic nitrogen fertilizer imports by building sustainable legume supply-chains. Maas stressed that just because protein crops are produced domestically and are non-GM, this does not mean that they are sustainable.

This point was one of the key messages from the debate: this is a cross-cutting issue, and must be dealt with as such. The way in which we produce and distribute European protein crops (and agricultural produce in general) cannot be addressed by agricultural policy alone. Topics such as environmental and human health, nutrition, and social and economic justice are all issues that need to be considered and worked into policy strategies. In light of this, the rest of the European Commission should consider how they it work together on the issue in an interconnected way.

The elephant in the room, however, was a critical discussion of why the EU needs such a huge amount of food crops in the first place.

The vast majority of soybean imports in the EU end up as feed for the industrial livestock industry. Steps need to be taken to tackle the overconsumption of meat, and we need to have a clearer picture of how much food that is produced from protein crop feed - such as meat, eggs and dairy – is wasted. The current level of meat and dairy consumption is unsustainable, and trying to meet this unsustainable demand will only result in unsustainable solutions for farmers in Europe and beyond.

Despite this, the fact that sustainable protein plant supply in the EU is a hot political issue is a sign of significant progress. It offers an excellent opportunity to change the food system to make it work for farmers, consumers and nature.