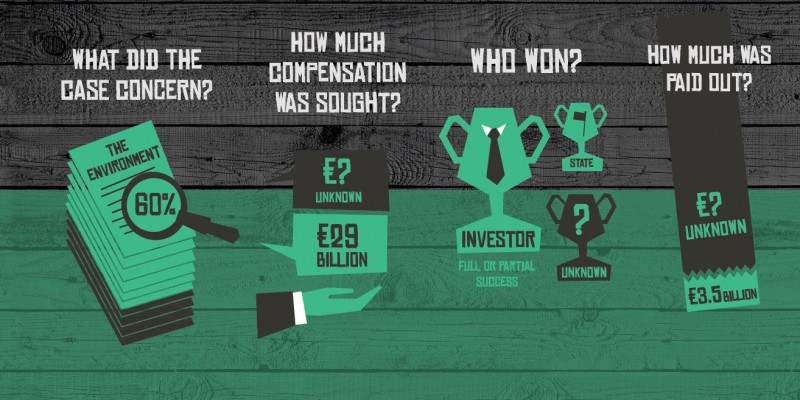 Revealed: how taxpayers are footing the bill for Europe's trade deals

New research today reveals that European governments have already paid at least €3.5 billion to private investors due to a clause in international trade deals. The mechanism – known as 'investor-state dispute settlement' – is set to become more widely used if EU trade deals with Canada and the US go ahead as planned.

The new analysis by Friends of the Earth Europe shows the extent to which the inclusion of these special rights for investors in previous trade treaties has allowed corporations to sue European governments in secret courts. This phenomenon risks dramatic expansion given the unprecedented scale of the EU-Canada and EU-US trade agreements.

The investor-state dispute settlement (ISDS) mechanism provides a way for corporations to seek compensation from governments if new laws get in the way of their returns on investment.

According to the research, Eastern European member states have been hit hardest by claims for compensation. Poland tops the table, having reached a settlement for €2 billion with Eureko, a Dutch insurance company.

Environment-related laws are the most often challenged legislation, accounting for two thirds of cases recorded. The research encompasses 127 investor-state dispute cases from bilateral investment treaties and other international treaties. Given the secretive nature of the arbitration process, some information on the amounts claimed for and awarded to companies is not available.

Speaking about the findings, Natacha Cingotti, trade campaigner at Friends of the Earth Europe, said: "The secrecy surrounding investor-state arbitration means these figures could be the tip of the iceberg. The huge sums involved leave no doubt about the unacceptable burden that such VIP treatment for foreign investors puts on taxpayers. If the EU-Canada and EU-US trade deals go ahead as planned, we expect to see an increase in multi-billion Euro claims – and citizens being forced to foot the bill."

Key findings of the research include:

Natacha Cingotti continued: "These special privileges for investors create a dangerous chilling effect on vital legislation to protect people and the environment. Trade deals between the EU and the US, and the EU and Canada are a Trojan Horse that will damage democracy – they should be stopped."

There is widespread public opposition to privileged rights for investors. In acknowledgment of the controversy surrounding ISDS, the European Commission was forced to hold a public consultation earlier this year to which at least 131,000 out of 149,000 responses expressed a clear "no to ISDS". The final consultation results have not yet been published by the European Commission.

A petition opposing the EU-US and EU-Canada trade deals today exceeded one million signatures. The petition was launched by the Stop TTIP Coalition after their application for an official European Citizens' Initiative was rejected by the European Commission in early September. It passed the million-signature mark in less than two months – faster than any official European Citizens' Initiative.

A peer-reviewed database of the 127 investor-state dispute settlement cases involving EU member states since 1994, for which documents were publicly available, can be found here. (.xlsx) This database of investor-state dispute settlement cases reflects our knowledge on cases filed since 1994 to August 2014. Because of the secrecy of the international arbitration system, it cannot be all encompassing. A number of case outcomes may alter and change over time as pending case proceedings progress and if case information becomes publicly available.