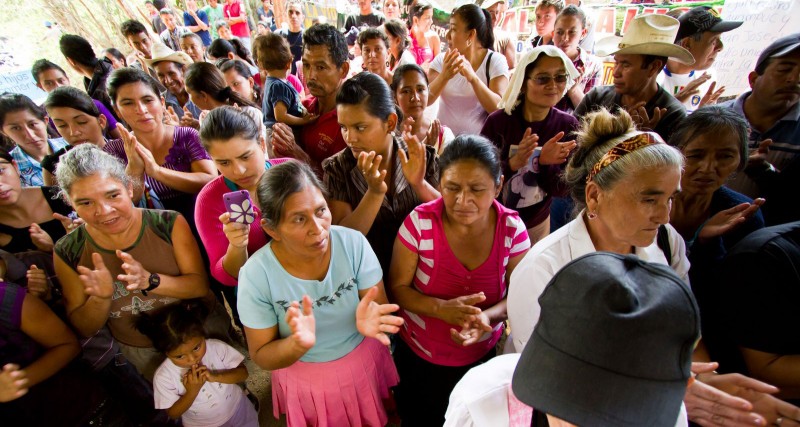 Social movements in Guatemala are being increasingly criminalised, repressed, intimidated and subjected to human rights abuses, according to representatives of indigenous and feminist social movements, including Friends of the Earth Guatemala.

Guatemala has increasingly opened its doors to European investors, which has resulted in mounting pressure on local communities and the environment, and has led to land grabs and human rights violations. This is often in collaboration with the government, according to the representatives, in a rush to exploit the nation's gold and nickel deposits, and land for sugar and palm oil development.

The current government wants to introduce a policy of terrorism and repression – pursuing and illegally incarcerating people from social movements. Natalia Atz Sunuc, Friends of the Earth Guatemala said: "Campesinos and indigenous people are labelled as 'terrorists' for defending their basic human rights in a peaceful way".

Paula del Cid, representative of the Feminist Alliance of Guatemala said: "in a context of mandatory evictions, the role of the army is increasing, and sexual abuse is being used as a tool to intimidate women from defending their land."

In June 2011, forty European parliamentarians denounced the situation in Guatemala, but the European Union still refuses to take a stand in their trade and investment policies – ensuring policies include mechanisms to monitor and enforce the defence of human rights.

The Spanish company Hidralia Energía, developing dams for hydroelectric power in Santa Cruz de Barillas, Guatemala, began development with neither permission nor consent from indigenous and local communities. This offers a clear example of company and governmental roles in criminalising peasants and indigenous people, while grabbing land to exploit Guatemala's natural resources. Either the Guatemalan or Spanish government must assume their responsibility to respect and protect human rights in Guatemala.