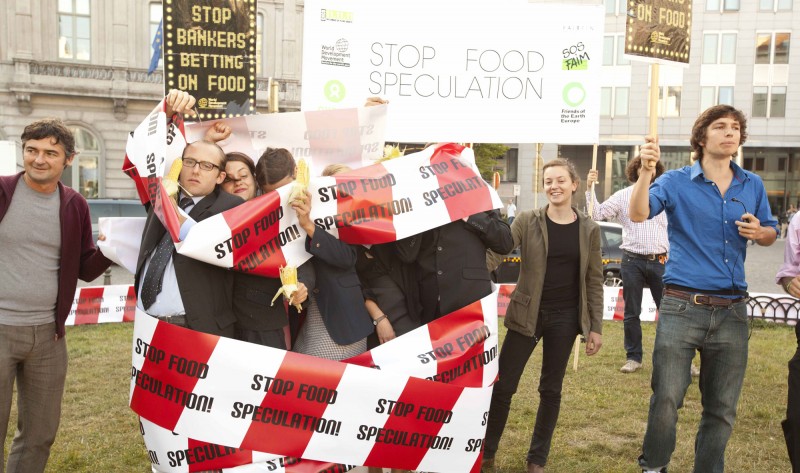 Food speculation by banks and financial institutions has contributed to rapid and unpredictable swings in food prices over recent years, with devastating impacts on poor people in developing countries. The European Union will introduce new regulations which take small steps towards curbing the financial speculation on food crops, according to Friends of the Earth Europe, after a deal was struck last night between the European Parliament and Greek EU Presidency.

The agreement on the review of the Markets in Financial Instruments Directive (MiFID) - which sets new regulations for financial markets – will curb the amount of shares a trader can hold. National governments will set position limits, or limits on the amount of shares a speculator can hold on the market, with oversight and direction by a European body, the European Securities and Management Authority (ESMA).

Anne van Schaik, accountable finance campaigner at Friends of the Earth Europe said: "Food speculation costs the world's vulnerable the food on their plates. A new EU law that cuts this unethical trade is welcome. However with national governments having the possibility to set position limits, it remains to be seen whether they will really rein in this destructive practice, or fall victim to corporate greed."

Although the improvements are welcomed by Friends of the Earth Europe, the proposal contains some serious loopholes which could allow speculation to continue, and falls short of the European-wide limits needed to fully rein in the destructive practice of food speculation. Friends of the Earth Europe is concerned that national governments will set limits as low as possible, starting a 'race to the bottom', effectively undermining regulation. In addition, changes to the reporting criteria for financial institutions in the text could now also aide attempts to monitor food speculation.

WDM: Exposed: How the UK government has colluded with the UK finance sector against legislation to curb food speculation