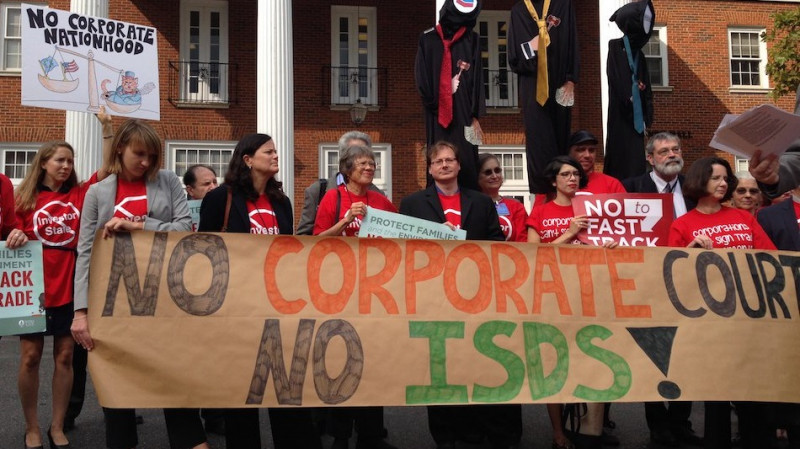 Last week, governments met at the United Nations in Vienna to discuss potential changes to the ISDS (Investor-State Dispute Settlement) system. This parallel justice system, benefitting multinationals and elite corporate lawyers, has been widely criticised around the world for its damaging impacts on the environment, on democracy and on public budgets.

After a strong and widespread public resistance against ISDS, the European Union carried out a public relations exercise. It changed the name of ISDS to “Multilateral Investment Court” (MIC), made tiny changes to some of its features and kick-started discussions at the international level.

Naming it “Multilateral” is arguable since for the moment only Canada and the EU are supporting it. It is also arguable if this system should be maintained at all.

ISDS enables private investment lawyers, called arbitrators, with the power to force states to pay enormous amounts of compensation to foreign investors when they deem that their profits are affected by a law or governmental decision. This law could have been issued to protect the environment. Last week’s meetings did not question this enormous power of arbitrators, but merely focused on how to improve the procedures of ISDS. Changing a book cover might look like progress but it doesn't change the story.

Friends of the Earth Europe and other NGOs have shared this assessment with all country delegates last week through a letter asking for fundamental reform, signed by 300 civil society organisations from 73 countries.

"When a country can be sued by a foreign corporation in a secret trade tribunal for protecting the environment —fundamental change is needed."

While there is a space to discuss ISDS, we should open this space as wide as possible and ask: Do we need ISDS? What does it bring except profits and a powerful lobbying tool for multinationals? Who gains from this system?
With the current ISDS, the climate, public budgets, workers and our environment are clearly the losers.