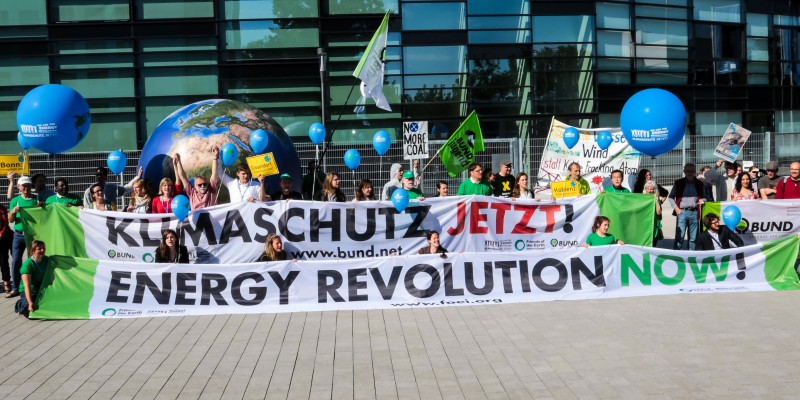 Pope says climate crisis is a matter of justice

Today, responding to the publication of Pope Francis' papal encyclical on the environment, Friends of the Earth International's Lucy Cadena said: "Pope Francis is right to say that there is a moral imperative to act on climate change with the utmost urgency and ambition. He is a friend of the earth and of the poorest and most vulnerable. Addressing climate change is a matter of justice: those who have contributed least to causing the crisis are suffering the greatest consequences.

"The Pontiff has joined a long list of religious leaders, social and environmental movements, youth and labour movements, and indigenous peoples who are addressing climate change with resilience, solidarity and compassion."

In a crucial indictment against 'false' solutions to the climate crisis, the Pope warned of the perils of putting 'blind faith' in technical solutions and the financialisation of nature through carbon credits.

Lucy Cadena continued: "Pope Francis is echoing the demands of communities and movements around the world who want real solutions now. We need measures that benefit everyone and not corporate-driven false solutions.

"We commend the work of communities and movements globally who have long worked to restore the balance of life on earth, implementing renewable community energy solutions, resisting dirty energy and uniting to build the movement for climate justice.

"Those who owe the biggest ecological debt, industrialised countries, must now act with urgency and ambition. Dirty corporations that have long abused our planet have driven us to the brink of environmental and social catastrophe. Pope Francis' words today meet the surge in popular demand for urgent, ambitious and equitable action to address the climate crisis."

Pope Francis also warned against the social, economic and environmental dangers of industrial agriculture, such as those posed by genetically modified (GM) crops and pesticides.

"Pope Francis calls for us to get off the pesticide and techno-fix treadmill that claims to feed the world but in reality is often at the service of finance and consumerism," said Kirtana Chandrasekaran, food sovereignty coordinator at Friends of the Earth International.

Technological fixes such as GM crops destroy small-scale agroecological farming and allow corporations to control our lands and seed supply.

"The real solutions to feeding the world and nurturing our planet are in the hands of small scale food producers. Food sovereignty and agroecology provide us with peoples' knowledge and science and this is where we need to provide support," added Kirtana Chandrasekaran.